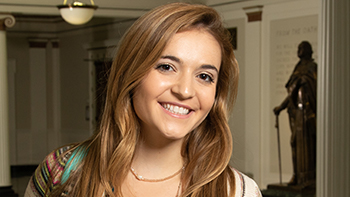 From the moment Brielle Valenza stepped foot in the Maxwell Auditorium as a first-year student for her American National Government and Politics class, she knew she had come to the right place. "The sense of history in that room is palpable," says the Chester, New Jersey, native. "It was overwhelming." And Professor Chris Faricy? "He was just as excited about political science as I am."

Valenza describes herself as "passionate" about politics. "I've always wanted to get involved in improving our systems of government," she says. In fact, she's passionate about most everything. The second-year student and Renée Crown Honors Scholar is a double-major in political science and psychology with a minor in philosophy and a 3.8 GPA. With this combination, she's looking forward to law school or perhaps a career at an FBI behavioral analysis unit.

Valenza is equally engaged outside of class, working as an analyst for a political talk show on student TV and writing and recording her own musical compositions. "Music is my outlet," she says. She's volunteered at the local Rescue Mission thrift store and, at her sorority (Tri Delta), she's active in fund raising for St. Jude Children's Research Hospital.

Among her classes this semester is one on social contracts, in which students analyze every significant political theorist from the 17th to 19th century. "It's honestly so fascinating," she says. "My Syracuse education is providing an amazing foundation."

Valenza has a lot of irons in the fire — possible, in large part, because of generous support from the Walter F. Huxley Invest Syracuse Scholarship. "It has had such a positive impact on what I can accomplish here and my family's financial state," says Valenza, whose sister is also in college. Syracuse is "an amazing institution," she says, but college is expensive. "The scholarship is really a door-opener for allowing me to do the things I want — such as study abroad — without restriction." 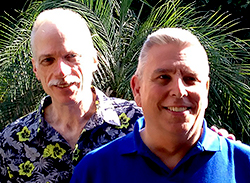 "Part of my success," he says, "was due to the fact that my parents had a higher education, and that was only possible because of outside assistance." Hedrick's father attended college on the GI bill; his mother attended nursing school with assistance from the federal war effort. Not surprisingly, the Walter F. Huxley and Robert K. Hedrick Endowed Scholarship, which will be funded through Hedrick's estate, will give preference to first-generation undergraduate students attending Maxwell.

"Education is critical to reducing income inequality, and it changes a family's trajectory forever," Hedrick says. Plus, he adds, "Maxwell is a leading public service school and today, more than ever, we need good, well-educated people trained in public service."