According to Harry Lambright, climate change is not only a challenge of policy, industry buy-in, and international cooperation, but a technological Everest comparable to the moon shot. 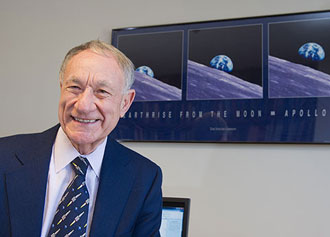 Harry Lambright credits space exploration with helping spark the environmental movement. The “all one world” photos of Earth available from Apollo spaceships shifted public perceptions of the vulnerability of the planet we inhabit.

What do the Human Genome Project, the International Space Station, and nanotechnology have in common? They’re all “Big Science” initiatives, with astronomical budgets, lengthy timelines, complex technological challenges, cross-sector collaboration, and oversight by policymakers in the highest echelons.

Harry Lambright’s favorite “Big Science” success story is the Apollo moon landing. It has fascinated him since he was a graduate student at Columbia University during the space race. “Apollo was special,” he says. “It was an example of what can be done when government, industry, and universities work together. And it was achieved on time and near budget!”

Lambright, now a professor of public administration and international affairs and political science, has spent much of his career studying the space program. He is the author, most recently, of Space Policy in the 21st Century. But he is equally an expert on environmental policy — the former director of Maxwell’s Center for Environmental Policy and Administration. As such, when Lambright considers the challenges of arresting global warming, he draws comparisons. Climate change, he says, is the ultimate Big Science challenge.

“Apollo was an example of what can be done when government, industry, and universities work together.”
— Harry Lambright Other environmental policy experts will tell you that climate change is more than that. It requires solutions that will be accepted and implemented across a spectrum of industries and businesses — “customers,” of a sort, in the United States and all developed nations. Apollo never faced that. Its only customer was the American government. Climate change is a policy quandary that must account for commerce, culture, and hoped-for shifts in consumer behavior.

Lambright agrees that dealing with climate change has multiple facets. Still, for him, it all hinges on science and, particularly, the potential for American governmental policy to champion and pilot new technologies. The shift to a low-carbon economy will require extraordinary innovation and lots of money (for the U.S. alone, a $150-billion investment in new technology, according to World Bank economist Nicholas Stern). In some cases, new inventions are required; in others, current technologies need to be scaled up for commercial viability, with all the attendant risks and potential failures — a pilot process for which government can play a lead role. “The transition to new fuels,” says Lambright, “isn’t going to happen without government, universities, and industry working together with a sense of urgency.”

To Lambright and others of his ilk, it feels like Apollo in 1961. That program required the largest commitment of resources ($24 billion) made by any nation in peacetime and the coordinated support of more than 20,000 firms and universities. It benefitted from clear goals, strong leadership, sustained public and political support, and an outside threat (Soviet space domination). “Some Big Science programs just have the capacity to inspire,” says Lambright.

Climate change isn’t doing as well, Lambright says. It cannot succeed as Big Science until policy mandates are clear. And yet, climate change has no clear goal upon which governments and the public agree and is not universally viewed as an imminent threat.

Lambright recalls urgency, even optimism, at the beginning of the Obama Administration. In 2009, he was among experts invited by Al Gore to a retreat on the politics of climate change. “There was a sense that Obama would take lessons from this conference,” he says. “I’m not sure that ever happened.”

Even for NASA, political support seems to be flagging. After Apollo, NASA chalked up a string of successes: the Space Shuttle, the Hubble Space Telescope, the International Space Station. Now, though, enthusiasm  for initiatives is hard to come by. The $8.7-billion Webb telescope, for instance, faces an uncertain future. “It’s becoming a test of our willingness to invest in large-scale technological projects,” Lambright says. The Mars Science Lab might be the last big Red Planet project of this decade, he says, unless the U.S. can work with international partners. (Lambright is currently writing a book on Mars exploration.)

Perhaps NASA could have a fresh, fundable mission as a lead agency battling climate change. Lambright points out that NASA has been the de facto climate change science leader since fiscal year 1976, when the Space Act was revised to give it authority to perform research on pollution, ozone depletion, and climate change. NASA’s spending on climate science exceeds that of all other federal agencies combined, and its satellites study sea levels, ocean temperature, and ice coverage.

A NASA-based climate-change “czar” would need to operate with the bureaucratic savvy of legendary Apollo director James Webb, Lambright says, but the current political climate would make that difficult for anyone. For instance, Webb could rely on broad agreement that the Soviets were dangerous and Apollo therefore worthwhile. Today, on Capitol Hill, agreement on any aspect of climate change is virtually nonexistent.

“Today there’s less collegiality, less compromise, less cross-legislative collaboration,” observes Lambright. “I am confident that scientists and engineers can solve the climate change challenge, but the political constraints bother me. I believe this country faces a test of its ability to still do something big and inclusive.”

Martin Walls is a freelance writer, communications consultant, and author of three books of poems.

This article appeared in the fall 2011 print edition of Maxwell Perspective; © 2011 Maxwell School of Syracuse University.