Dwight Waldo Started It All

Minnowbrook. It isn’t so much a place or an occasion as a state of mind. And that’s due to one person: Dwight Waldo.

Waldo joined Maxwell in 1968 as the Albert Schweitzer Professor of Hu­manities, a position carrying with it substantial funds for programming, with which he decided to throw a conference for young scholars.

He was already an influential figure, a political scientist with strong ideas about public administration. Before his first professorship (at UC Berkeley), he’d worked in the federal Office of Price Administration and Bureau of the Budget — experiences that informed The Administrative State: A Study of the Political Theory of American Public Administration. Waldo’s 1948 book challenged the idea that public administration is value-neutral, performed in a dispassionate, almost mechanical manner. He argued that public servants should become active, informed, politically savvy agents of change, working to protect due process and public access to government. The book spawned a debate about political-versus-“scien­tific” administration that hasn’t completely faded, even today. 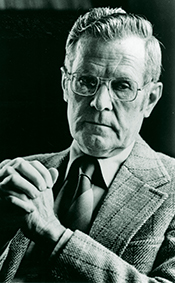 But in 1968, with society and political processes in turmoil, the debate seemed especially germane — thus Waldo’s conference. He envisioned a meeting of the best young minds in public administration, held at Syracuse University’s Minnowbrook Conference Center, where rising scholars would attempt to reconcile PA’s responsibilities with a society in chaos. Resulting papers varied, but the attendees ultimately advocated an activist public administration, embracing social equity. Some advocated confrontational decision-making. “Relevant” administration was a common theme.

Together, these ideas were packaged as the “New Public Administration” — ideas disseminated in the published Minnowbrook proceedings, and through workshops, retreats, articles, books, and later conferences. Waldo was amid his 11-year stint as editor-in-chief of the Public Administration Review, where his influence was pervasive; he redefined public administration as an autonomous field that merged academics and practice.

It’s uncanny how Waldo’s unusual background, as both public sector practitioner and political science professor, made him right for a PA revolution. It’s clear, also, that the marriage of Waldo with Maxwell was made in heaven, together spawning what Minnowbrook means today. “Maxwell is a school of social science, and Dwight represented the philosophy of thinking in broad cross-disciplinary terms,” said Ken Meier ’74 MA (PSc)/’75 PhD (PSc), a political science professor at Texas A&M University, shortly after Waldo’s death in 2000. “The Maxwell idea is what Dwight stood for.”

Today, Minnowbrook occupies whole sections of PA history, and Waldo’s legacy loomed over this summer’s 50th anniversary conference. “He’s central,” said Curt Ventriss, a senior public policy scholar at the University of Vermont, while at this year’s Minnowbrook, “because he raised all the big questions in public administration. What he first started in 1948 is still with us in 2018. . . He left us with a gift. We should never stop asking those controversial questions.” After Waldo’s death, H. George Frederickson, a senior PA professor at the University of Kansas (who organized Minnowbrook II in 1988), took stock of the legacy. He listed for this magazine three lasting themes in PA: social equity; democratic administration; and proactive, advocating, non-neutral public administration. “In many ways,” he said, “they all trace to Minnowbrook.”