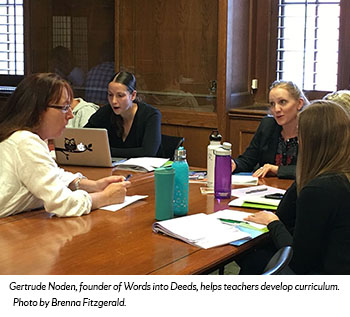 In the aftermath of an election marred by divisive rhetoric, many teachers are finding that their classrooms have become open forums for children to express opinions towards minority groups that are offensive, intolerant, and often disturbing. Refugee students have been among the primary targets.

“Kids are coming into the classroom spouting things that would be considered DASA (Dignity for All Students Act) violations," one local teacher observed. "It’s horrible.”

“The reality is that the 2016 election sanctioned the ability to say things that were previously out of the question – statements that are racist, xenophobic, and egregiously false," said Dr. Jamie Winders, chair of the geography department at the Maxwell School of Citizenship and Public Affairs at Syracuse University and a presenter at the workshop. "I’ve had so many teachers calling after the election and asking me, ‘How do I talk about this with my students?’”

Syracuse and Cornell offer stipends to participating teachers, who are eligible for continuing education credits through TST BOCES.

Teachers from the 7th to the 27th Districts of New York (including the New York City, Utica, Ithaca, Dryden, and Syracuse school districts) participated in the conference, which was supported by the U.S. Department of Education’s National Resource Center (NRC) program, Subjects included how to integrate refugee children into the classroom, the need to prioritize education in refugee camps and host nations, and the dangerous rhetoric that has begun to surface in classrooms across the U.S.

In a presentation titled “Exploring Multicultural & Multilingual Identities Through Memoirs, Movies, and Mask-Making,” Thamora Fishel, associate director of Cornell’s Southeast Asia Program, and Michelle Kirchgraber-Newton, an ESOL teacher at Belle Sherman Elementary School in Ithaca, explained that educating students on the importance of inclusion and diversity may be done through the simple act of sharing.

They highlighted the effectiveness of mutual cultural introduction through interactive crafts, media, and open discussions on diversity.

In addition to providing students exposure to different backgrounds, this method also encourages refugee students to be active participants in the classroom, Kirchgraber-Newton said. “For the first time, refugee students feel as if they know more than their peers. This gives these children confidence that is crucial for their development and integration.”

Keynote speaker Gertrude Noden, founder of the Ithaca-based educational consultancy Words into Deeds, shared several ways in which teachers can help their students learn empathy, cultural sensitivity, and community activism in a delicate political climate. These include inviting refugee guests into classes to share their experiences, engaging with international human rights documents such as the Universal Declaration of Human Rights (UDHR), and inspiring students to take the initiative in service projects.

At the conclusion of her talk, Noden said she was “encouraged that so many dedicated educators were committed to deepening their understanding about current large groups of populations and their willingness to work out ways in which their schools can also acknowledge and address the crisis through student action and empowerment.”

After discussing of practical methods for promoting unity and understanding among classmates, many participants said their outlook on the upcoming school year had improved.

David George of Dryden Central School District said the summer institute was “a wonderful opportunity for anyone who wants to consider an issue from many angles and perspectives. The current information, diverse views and interdisciplinary insight shared are invaluable," he saidl "It is much easier to approach an issue in the classroom after having examined it through cultural, geographical, historical, political, psychological, sociological and pedagogical lenses.”

Jeannette Luther of Spencer-Van Etten Middle School shared that “this year's workshop stimulated our minds on refugees around the globe. I feel so prepared to engage students on discussion concerning refugees. I am also volunteering at a refugee camp in two weeks and this workshop was a tremendous help!”

Leigha Crout is the graduate assistant for outreach at Cornell's Southeast Asia Program.