Seeking Refuge: Birds and Landscapes of the Pacific Flyway 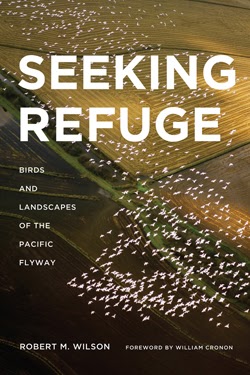 Each fall and spring, millions of birds travel the Pacific Flyway, the westernmost of the four major North American bird migration routes. The landscapes they cross vary from wetlands to farmland to concrete, inhabited not only by wildlife but also by farmers, suburban families, and major cities.

In the 20th century, farmers used the wetlands to irrigate their crops, transforming the landscape and putting migratory birds at risk. The U.S. Fish and Wildlife Service responded by establishing a series of refuges that stretched from northern Washington state to southern California. What emerged from these efforts was a hybrid environment, where the distinctions between irrigated farms and wildlife refuges blurred. Management of the refuges was fraught with conflicting priorities and practices. Farmers and refuge managers harassed birds with shotguns and flares to keep them off private lands, and government pilots took to the air, dropping hand grenades among flocks of geese and herding the startled birds into nearby refuges. Such actions masked the growing connections between refuges and the land around them.

"Seeking Refuge" examines the development and management of refuges in the wintering range of migratory birds along the Pacific Flyway. Although this is a history of efforts to conserve migratory birds, the story Professor Robert Wilson tells has considerable salience today. Many of the key places migratory birds use — the Klamath Basin, California’s Central Valley, the Salton Sea — are sites of recent contentious debates over water use.

Migratory birds connect and depend on these landscapes, and farmers face pressure as water is reallocated from irrigation to other purposes. In a time when global warming promises to compound the stresses on water and migratory species, "Seeking Refuge" demonstrates the need to foster landscapes where both wildlife and people can thrive.