The Palgrave Handbook of African Colonial and Postcolonial History 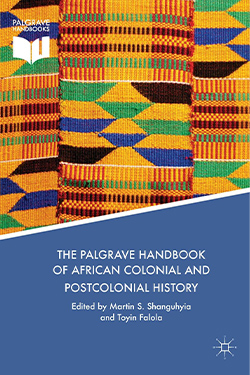 Written by more than 50 historians and scholars in African studies, The Palgrave Handbook of African Colonial and Postcolonial History focuses on African colonial and postcolonial history and the relation between the two eras. It also proves that the production of African history is the result of blended, interdisciplinary efforts, as evidenced by the contributors drawn from various disciplines in African studies: history, political science, anthropology, religion, African art, law, music, to mention but a few.

“The Handbook was conceived out of the necessity to demonstrate the extent to which African history has expanded in scope, themes, and interpretations since the early 1980s,” writes Shanguhyia in the introduction. “The themes illustrate the depth of African modern history, the innovativeness and range of paradigms of its analysis, and the multidisciplinary lens for understanding Africa’s past.”

Shanguhyia also wrote the first chapter of the tome, where he argues that the African environment was the medium in which Africa’s activities and foreign interactions, powerful agents in shaping its history, developed. He also concludes that the outcome of the continent’s colonial reality created dynamic environmental relations between colonial states and African communities that left a lasting legacy on both African landscapes and their inhabitants.

Shanguhyia received a PhD in African history from West Virginia University in 2007. Before joining the Maxwell School faculty as an assistant professor of history in 2010, he was a visiting assistant professor of African history at the Ohio State University at Columbus (2008- 2009), and in the same capacity at the College of William and Mary in Williamsburg, Virginia (2009-2010). His research focuses on colonial Africa, with a specific concentration on Eastern Africa and rural economies and environments.

This wide-ranging volume presents the most complete appraisal of modern African history to date. It assembles dozens of new and established scholars to tackle the questions and subjects that define the field, ranging from the economy, the two world wars, nationalism, decolonization, and postcolonial politics to religion, development, sexuality, and the African youth experience.

Contributors are drawn from numerous fields in African studies, including art, music, literature, education, and anthropology. The themes they cover illustrate the depth of modern African history and the diversity and originality of lenses available for examining it. Older themes in the field have been treated to an engaging re-assessment, while new and emerging themes are situated as the book’s core strength. The result is a comprehensive, vital picture of where the field of modern African history stands today.