Water Politics: Governance, Justice, and the Right to Water 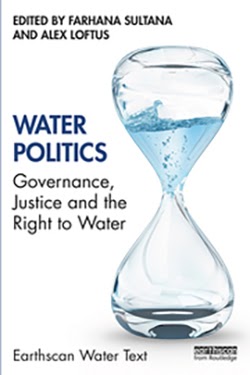 Farhana Sultana, associate professor of geography, co-edited Water Politics: Governance, Justice, and the Right to Water, which was recently published by Routledge. Her co-editor is Alex Loftus, a reader in political ecology at King’s College, London.

Building on their previous book, The Right to Water (published by Routledge in 2012), the new volume assesses how the 2010 ratification of the United Nations resolution, The Human Rights to Water and Sanitation, has influenced and inspired new regimes of water governance and water politics in both the Global North and Global South. It reveals ongoing struggles and discourses concerning water governance across the globe and the shifts occurring in policy dialogues, legal frameworks, and implementations. Contributors discuss how the rights to water and sanitation can be realized for vulnerable and marginalized communities lacking just access to water and how water insecurities may be resolved. Beyond its academic contributions, Water Politics offers practical suggestions for policy makers and other practitioners seeking to achieve the right to water and sanitation by helping these actors better contextualize their realities and organize to achieve water justice.

As an interdisciplinary scholar, Sultana works at the junctures of political ecology, transnational feminism, critical development studies, social and environmental justice, and human rights, while pushing the academy to incorporate non-Eurocentric thought and perspectives. Among numerous awards and honors, she recently received the 2019 Glenda Laws Award, presented by the American Association of Geographers in recognition of “outstanding contributions to geographic research on social issues.” At Maxwell, she serves as the research director for environmental collaboration and conflicts in the Program for the Advancement of Research on Conflict and Collaboration.

Scholarship on the right to water has proliferated in interesting and unexpected ways in recent years. This book broadens existing discussions on the right to water in order to shed critical light on the pathways, pitfalls, prospects, and constraints that exist in achieving global goals, as well as advancing debates around water governance and water justice. The book shows how both discourses and struggles around the right to water have opened new perspectives, and possibilities in water governance, fostering new collective and moral claims for water justice, while effecting changes in laws and policies around the world.

In light of the 2010 U.N. ratification on the human right to water and sanitation, shifts have taken place in policy, legal frameworks, local implementation, as well as in national dialogues. Chapters in the book illustrate the novel ways in which the right to water has been taken up in locations drawn globally, highlighting the material politics that are enabled and negotiated through this framework in order to address ongoing water insecurities. This book reflects the urgent need to take stock of debates in light of new concerns around post-neoliberal political developments, the challenges of the Anthropocene and climate change, the transition from the Millennium Development Goals (MDGs) to the Sustainable Development Goals (SDGs), as well as the mobilizations around the right to water in the Global North.

This book is essential reading for scholars and students of water governance, environmental policy, politics, geography, and law. It will be of great interest to policymakers and practitioners working in water governance, as well as the human right to water and sanitation.