For the past two thousand years the Ramayana has been among the most important literary and oral texts of South Asia. This epic poem provides insights into many aspects of Indian culture and continues to influence the politics, religion and art of modern India. The following material is designed to provide an entry into the study of the tradition of the Ramayana.

This work is collected from the institute, "The Ramayana, an Enduring Tradition: its Text and Context" in 1997 and an earlier Ramayana Institute in 1994, and includes updates from the South Asia Center at Syracuse University. Thanks is due to the National Endowment for the Humanities and the American Forum for Global Education which provided funding and to Syracuse University which acted as host. Our greatest gratitude is for the guidance provided by Professor Susan S. Wadley of Syracuse University who designed and led this seminar.

The Story of Rama

Brief Synopsis
Long Version
Oral Tradition and the many "Ramayanas" 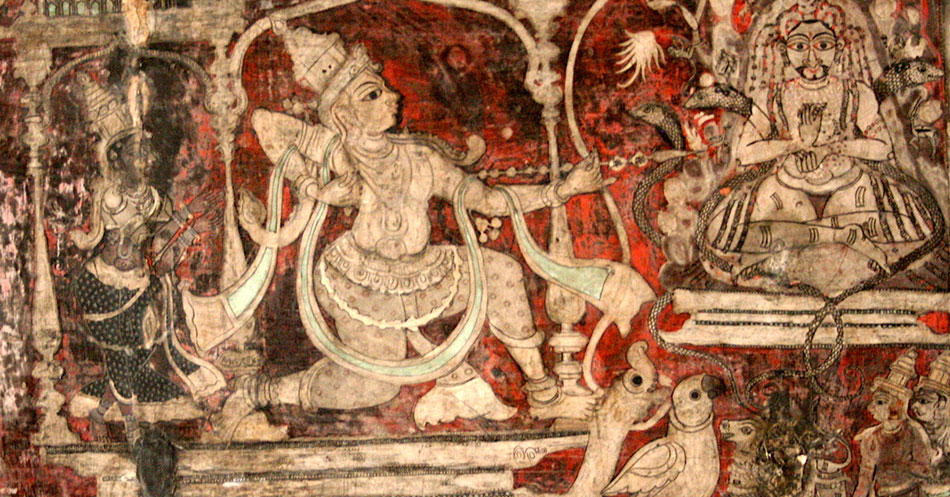 One of the oldest religious traditions, with a Hindu text dating from 1200 B.C.E., Hinduism embodies a large number of different expressive paths and has no single founder, text or administrative authority. The name Hinduism comes from sindhu, the Indo-Aryan word for “the sea” and came to apply to the region east of the Indus River.

Composed over many centuries, a set of texts called the Vedas (knowledge) contains many of the religion's beliefs and practices. Hindus believe the Vedas are “revelations” that were heard, not texts composed by people. Amongst the major concepts is dharma, one's duty in this lifetime, and karma, the actions one performs in one's previous and present lifetimes.

Other related concepts are transmigration of the soul after death and rebirth of the soul depending upon one's karma in this life. This endless succession of births can be ended by moksa, or salvation, attainable only by a strict practice of liberation from desire and education in the higher forms of knowledge.

The gods that govern Hinduism are the trinity of Brahma the creator, Vishnu the preserver and Shiva the destroyer and regenerator. Vishnu and Shiva incarnate themselves into other forms—as humans, animals or other living beings—to help the beings on Earth in times of crisis. Rama, the hero of the Ramayana and son of King Dasaratha, is one of the nine major incarnations of Vishnu and is thought to have been put on Earth to conquer Ravana, ruler of Lanka and king of the demons.

Bengali Scrolls of the Ramayana

One of the regional folk traditions by which the Ramayana is told are scrolls from Bengal. These scrolls of epics and popular stories are slowly adapting to new themes and images, but the examples here are episodes of the Ramayana.

This scroll, collected in Calcutta in 1980, is an unusual depiction with a red background of Sita’s abduction by Ravana. From the H. Daniel Smith Collection of Indian Art, Acc. No. 1994:158 University Art Collection. 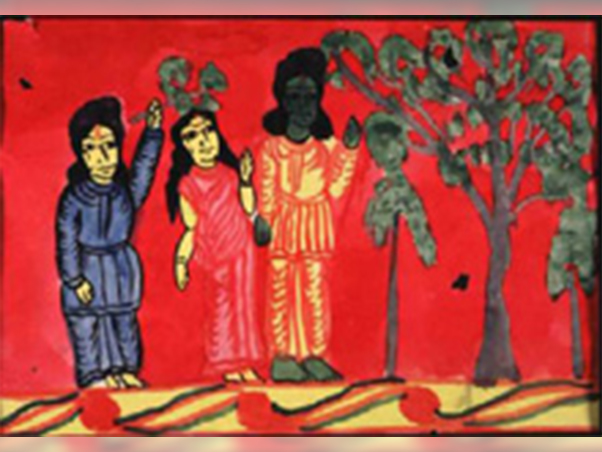 Rama, Lakshman and Sita in the forest. 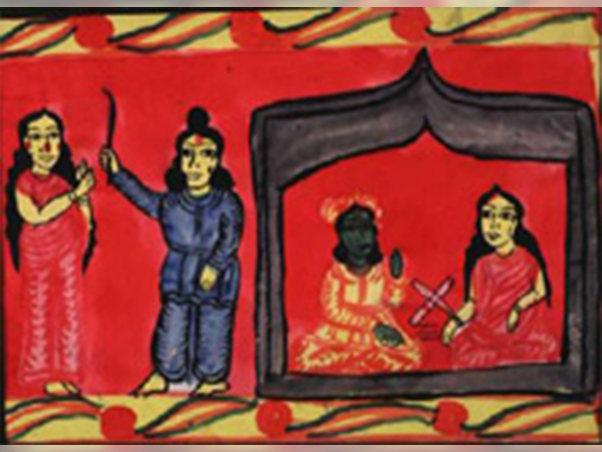 Lakshmana cuts off Shurpanakha's nose while Ram and Sita sit inside the hut. 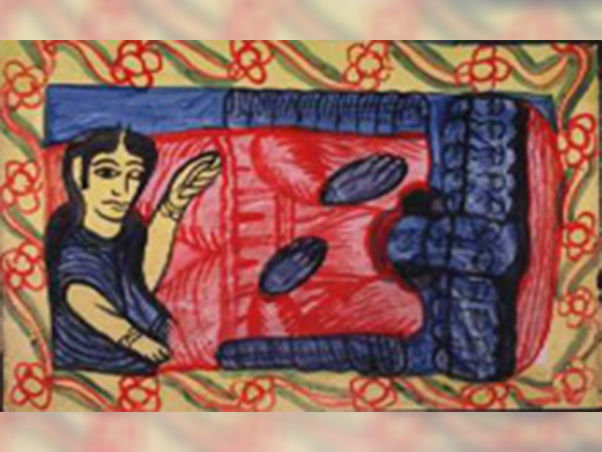 Her nose bleeding, Shurpanakha pleads with Ravana to take revenge. 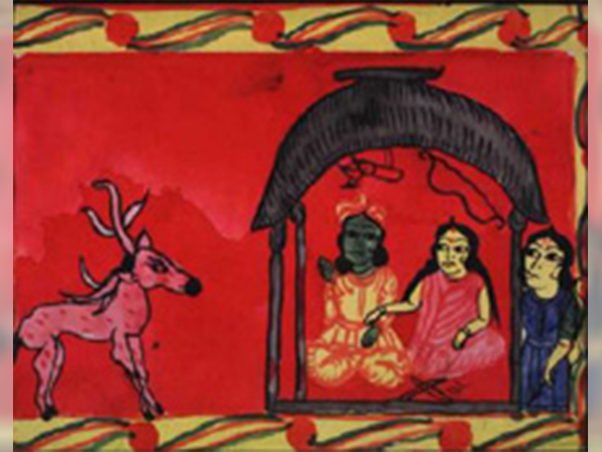 Ravana's uncle takes the form of a beautiful deer. 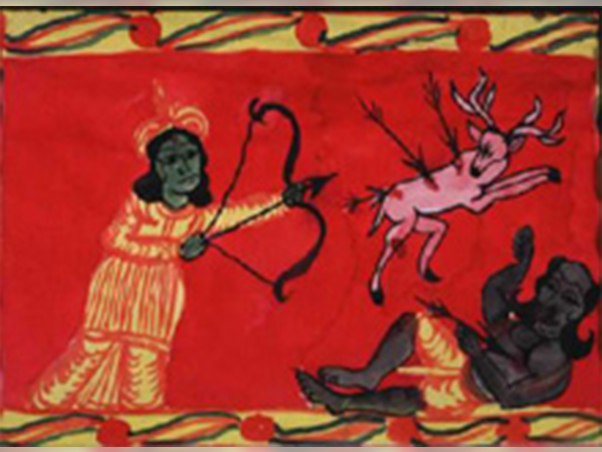 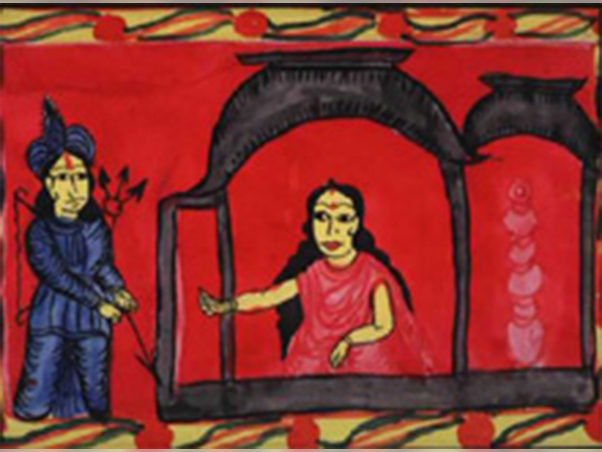 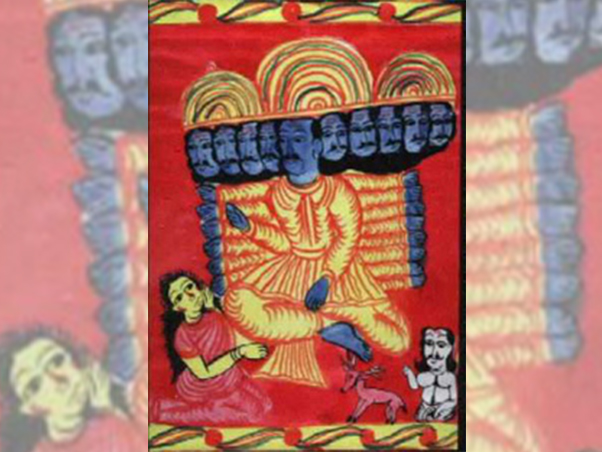 Dressed as a Sadhu, the ten-headed Ravana entices Sita to step out of her hut and captures her. 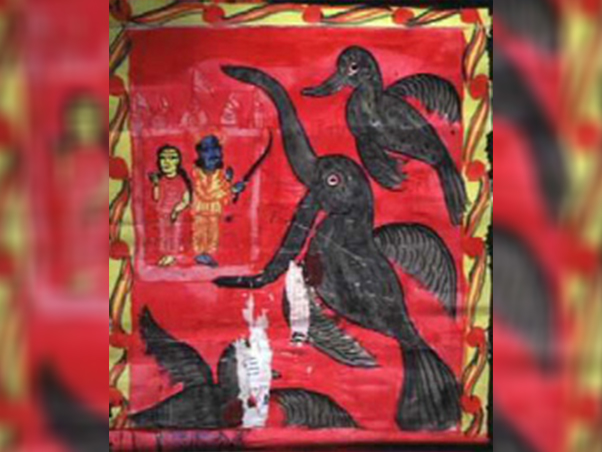 The vulture Jatayu attempts to capture the palinquin holding Ravana and Sita, but is unsuccessful.