At Maxwell, NY’s 57th Governor Was ‘All Competence and Hard Work’

Robert McClure’s introductory American Government and Politics course usually drew about 220 students per session, making it relatively easy for a student to be invisible.

But Kathy Courtney, as she was known then, stood out. And not just because she was among a minority of women in the class— in the late ’70s, most of McClure’s political science students were men.

“She came from a hard-working family, and she was very serious about taking advantage of the opportunity her parents had made possible,” says McClure, professor emeritus of political science and public affairs and former senior associate dean of the Maxwell School. “She was a dedicated and diligent student. She never cut corners. On my large syllabus, she read everything. Kathy was all competence and hard work.” 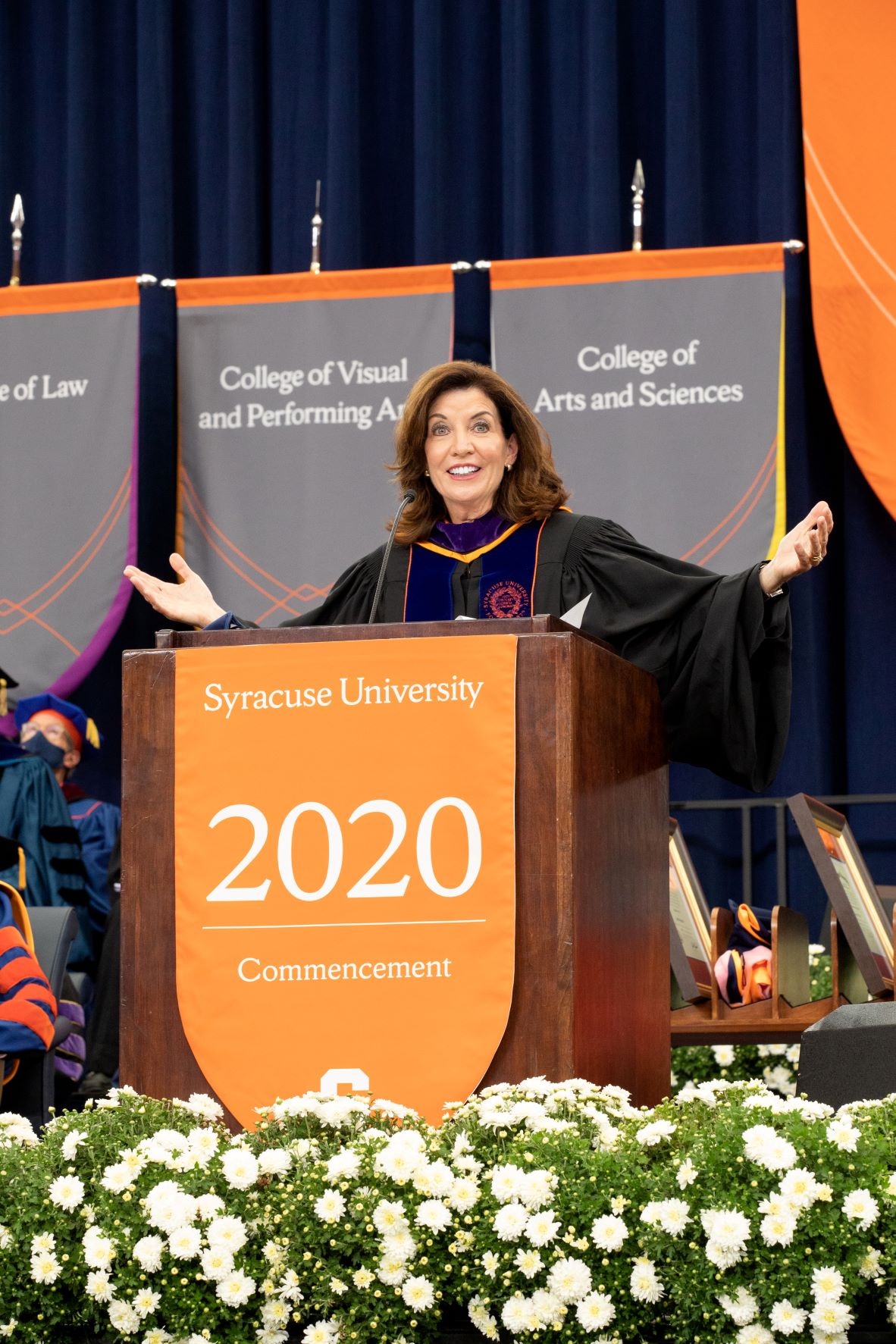 Hochul came to Syracuse University in 1976. In addition to her class with McClure, she took courses such as Modern American Politics, Russian Politics and Constitutional Law. She engaged in debates, sharpened her public speaking skills and participated in student government. After Syracuse, she earned a juris doctor degree from Catholic University in Washington, D.C.

Hochul represented New York’s 26th congressional district in Western New York from 2011-13. While serving in the U.S. House of Representatives, she served on the House Armed Services and Homeland Security committees and traveled to Afghanistan to confer with military leaders and meet with active-duty men and women. Her focus in Congress was job creation and bridging the skills gap by bringing together business and academia and creating opportunities for returning veterans.

Before her election to Congress, Hochul served as a practicing attorney; member of the Hamburg Town Board (1994-2007); and deputy county clerk (2003-07) and clerk (2007-11) of Erie County in Western New York. Earlier in her career, she was a legislative aide to Congressman John LaFalce and Sen. New York State Gov. Kathy Hochul ’80 B.A. (PSc) spoke to Syracuse University’s Class of 2020 during Commencement on Sunday, Sept. 19. Daniel Patrick Moynihan (D-NY), who later served as a University Professor in the Maxwell School. She was instrumental in drafting legislation related to campaign finance reform, immigration reform and   combating drug abuse.

For a time, Hochul worked in the private sector as head of government and strategic relations for M&T Bank. She left, however, following her nomination for lieutenant governor in 2014.

While lieutenant governor, Hochul returned to Maxwell numerous times, including in 2015 and 2016 to lead discussions on opioid abuse and sexual and relationship violence. Years earlier, when McClure was still teaching, she accepted his invitation to visit to speak with a cohort of students from Israel.

More recently—just a month after her swearing in ceremony—Hochul returned to the University to give the Commencement address to the Class of 2020. She told the graduates, “It takes a certain caliber of people to attend Syracuse University—they’re engaged, care about the community and come from many walks of life. Syracuse University provided me with an opportunity to spark my activism, while offering a caring, nurturing and diverse community.”

By Jessica Youngman with reporting by Syracuse University News Staff