Alumna Oversees Students in NYS Assembly Where She Once Interned

Vanessa Salman ’17 B.A. (PSc) found her experience as an intern with the New York State legislature so powerful she returned for a full-time position after graduating from Maxwell.

Going to work every day at the New York State Assembly, Vanessa Salman ’17 B.A. (PSc) is reminded of her time in the Maxwell School. As part of her responsibilities as a staff training associate for the Assembly Minority Conference, Salman oversees students within the conference participating in the Albany semester program. In 2017, Salman was one of those interns. 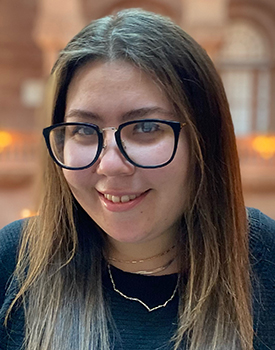 The Assembly Intern Program in Albany gives students the opportunity to work full-time in the New York State legislature. During the legislative session, from January through May, students work for an assigned legislator and take courses on New York State politics. Salman found her experience as an intern powerful, and this ultimately drew her back to work full-time post-graduation.

“It’s a really interesting environment. It’s so face-paced. It’s stop-and-go and unpredictable,” says Salman. “I feel like government has the ability to really position itself with the rise of new media and media technologies to really help people and to give people the proper information they need.”

As an intern, Salman sought out the opportunity to be placed with a female member because of her interest in representation in politics. She also wanted a member without staff in Albany because of her desire to take on as much responsibility as possible. The day she got her assignment in Albany with Assemblywoman Melissa Miller of the twentieth district, Salman was elated.

“This was a first experience for both of us,” says Salman, as she was the newly elected Assemblywoman’s first intern “We were able to craft the process together,” says Salman. “It was really cool how welcoming she was and the fact that she took the time to get to know me and what I was interested in getting out of the program.”

Since Miller did not have any staff housed in Albany, Salman was able to do “a little bit of everything.” She researched legislation on issues such as disability and accessibility awareness, helped draft a bill, took meetings on behalf of Miller, attended meetings with Miller, and worked on social media and communications.

“It was a well-rounded experience and it was very much what I made it. Because I voiced what I was interested in, [Assemblywoman Miller] was able to give me those opportunities. She believed in me and trusted my recommendations,” says Salman.

For example, as an advocate for people with developmental disabilities, the Assemblywoman sought to create equitable access to public building restrooms. Salman collaborated with the research department to find similar policies in other states and came to a recommendation of creating changing tables within public building restrooms with the capacity to support an adult. Salman then worked with counsel to draft a bill and a member in the majority to jointly introduce the bill.

“Maxwell courses really develop incredible critical thinking skills. Those have really been able to help set myself apart in my internship program, my current studies in Albany, and my work now.”

"I am a first-generation college graduate and this was a really cool experience for me. I was one of two participants from Syracuse University to do the program that semester, and I felt it was my duty to make our program proud,” says Salman.

Fast forward four years later, Salman is now supervising interns within the New York State Assembly as part of her work as a staff training associate—an experience Salman describes as “surreal.” With interns, Salman’s role is to help manage and guide the interns through the process. As a manager, she works to give the interns a fruitful experience like she had.

The majority of Salman’s time, however, is spent working in tandem with the human resources department as part of the central staff for Minority Leader Will Barclay L’95. Salman ensures that new members are equipped with all necessary information to run successful operations in Albany and in district offices. There may not be a guide on how to be an assembly member, but Salman works to create that for each member. She works with two to three assembly members at a time and participates in meetings with lobbying groups, researches legislation and makes purposeful legislative recommendations.

“Maxwell courses really develop incredible critical thinking skills. Those have really been able to help set myself apart in my internship program, my current studies in Albany, and my work now as I read legislation or look at information from an interest group or give a member my opinion on an issue,” says Salman.

Working where she once was an intern, Salman is constantly reminded of full-circle moments that bring her back to her time as an ambitious student in the Maxwell School and in Albany. With immediate interest her first-year on campus after finding out about the program, Salman eagerly attended information sessions to prep for the opportunity. When the time came, she made the most of it and ultimately set herself up for a meaningful career.

To current students navigating opportunities and career paths, Salman says to “be open-minded with purpose.” “There are so many different paths in the ecosystem of government that need great, civic-minded adults to make it better,” she says.