Junior Hendrik Hilpert has been named Senior Class Marshal alternate. Hilpert is a finance major in the Martin J. Whitman School of Management and an economics major in the College of Arts and Sciences and the Maxwell School of Citizenship and Public Affairs. He is also a student-athlete on the men’s soccer team and has earned numerous athletic and academic honors.

The longstanding tradition recognizes seniors who exemplify the academic achievement, campus and community involvement, and spirit of their class. In addition to leading their class at Commencement, the selected students will spend their senior year participating in and representing the graduating class at University-wide events and programs.

“The Senior Class Marshals embody the values of Syracuse University through their Orange spirit, academic and research experiences, leadership on campus, and commitment to service. They are exemplary students who thrive in their experiences and serve as role models for other students. Abigail and Danielle are well-deserving of this honor,” says Colleen O’Connor Bench, associate vice president in Enrollment and the Student Experience and chair of the selection committee

From Shelby, Nebraska, Schaf is a triple major in the College of Arts and Sciences and the Maxwell School, majoring in anthropology, forensic science and writing studies, rhetoric and composition. Schaf is also in the Renée Crown University Honors Program and has earned Dean’s List honors every semester. 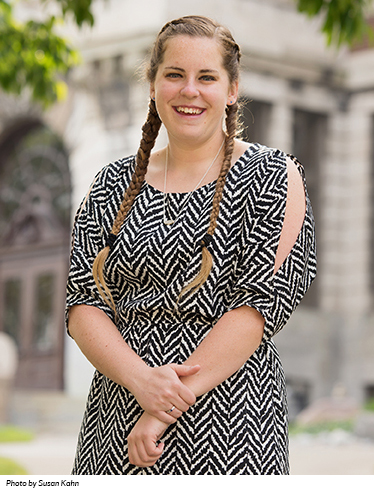 Schaf’s academic experience has been greatly shaped by research opportunities.  She has presented research on effects of labor therapy at the 19th-century Oneida County Asylum at the Bioarchaeologists’ Northeast Region Dialogue and served as a historical bioarchaeological researcher in the Physical Anthropology Lab performing osteological analyses on skeletal remains. She was also one of six students from the United States to be selected for the UK Fulbright Durham University Summer Institute, where she explored culture, history and heritage of the United Kingdom and studied archeology and medieval history.

On campus, her experience has spanned leadership roles in Residence Life as a resident advisor for the Science, Technology, and Math Learning Community, an executive board member of the College of Arts and Sciences’ Dean’s Team, co-captain of the women’s club volleyball team and co-president of the Undergraduate Anthropology Club. Schaf is also an active volunteer. She volunteers with University United Methodist Church and Eastern Hills Bible Church, as well as with Camp Kesem, a yearlong support system and summer camp for children who have been affected by a parent’s cancer.

Schaf credits her achievement and involvement to the people and experiences that have shaped her, and she hopes to do the same for others in her role as Senior Class Marshal. Always striving to leave a place better than when she came, Schaf looks forward to spending the next year further promoting inclusive communities and reciprocating the love, encouragement, support, guidance and care that she has received.

I am excited to have the opportunity to meet and work with some of the best individuals that Syracuse has to offer. The people here are extraordinary; they have shaped me into the woman I am today and have brought out the best version of myself,” says Schaf. “I am looking forward to extending my reach on campus, which will provide me with the opportunity to form more relationships with people than I ever thought I could. I’m also looking forward to using this role to leave a positive impact; giving back all what SU has willingly given me.”