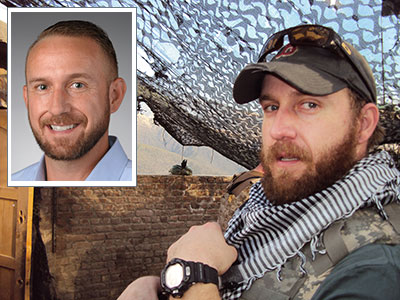 Tillman scholar Ryan Gross during his first Defense Intelligence Agency deployment in Afghanistan and today, as a Maxwell student in public administration

When Ryan Gross enrolled last fall in the Maxwell course U.S. Intelligence Community: Governance and Practice, he was certainly well prepared to explore the topic. Gross has worked in the intelligence field since 2000 — serving as an Army officer who led intelligence operations for an infantry battalion in Iraq, and then as an analyst for the Defense Intelligence Agency and U.S. Central Command, with three deployments advising commanding generals in Afghanistan.

As a student in courses on such subjects as intelligence gathering and conflict studies, Gross clearly brings an informed perspective to the table. “There have definitely been multiple occasions,” he says, sitting in the Eggers Hall commons on a bright afternoon, “where I’ve been able to use my experience to feed a conversation or answer people’s questions.”

Gross has come to Syracuse to pursue his master of public administration at the Maxwell School as the University’s first Tillman Scholar. Founded in memory of Pat Tillman, who put his NFL career on hold to enlist in the Army after 9/11 and died in Afghanistan in 2004, the Tillman program awards scholarships to veterans (and military spouses) for continuing education and public service. In 2016, the Tillman Foundation invited Syracuse to become its 15th university partner, in honor of SU’s deep and longstanding commitment “to help more student veterans and spouses realize their potential as leaders of their communities and our country” (in the words of foundation chair and co-founder Marie Tillman).

As SU’s first Tillman Scholar, Gross exemplifies the spirit of the partnership, says Michael Haynie, founding executive director of SU’s Institute for Veterans and Military Families. “I think it’s truly appropriate that our first Tillman Scholar is a Maxwell student,” Haynie notes, “given the commitment to public service that is shared by both the Maxwell School and the Tillman Foundation.”

During his 17-year career, Gross has seen the challenges of national security from many sides. Stationed with the Army out of Fort Hood, Texas, he prepared an infantry platoon and intelligence analysts for combat following 9/11. After an injury in a mortar attack in Baghdad in 2004 brought him home for surgery and recovery, Gross shifted to the Defense Intelligence Agency in Washington, analyzing developments in Iraq and Afghanistan during the surge and beyond, and then he relocated to Tampa with his family to work at U.S. Central Command, focused most recently on improving the military’s targeting against ISIS.

In joining Maxwell’s MPA program, Gross aims to broaden his knowledge, especially of policy making. Maxwell’s Institute for National Security and Counterterrorism, a collaboration with SU’s College of Law, is also a big draw; along with his MPA, Gross is working toward an advanced certificate in security studies. “I like the fact that you can take law classes along with Maxwell classes,” he says. “Plus Syracuse is known nationwide for its treatment of veterans, both in the acceptance rates and once you get here. The IVMF has been amazing.”

His graduate education, Gross feels, will help advance his ultimate goal: to bring policy more in line with complexities on the ground.

"Having a veteran like Ryan at the Maxwell School is an opportunity to educate those who are otherwise disconnected and unaffected by war."
Michael Haynie, Institute for Veterans and Military Families

“I started on the ground in the Army, leading soldiers who were 18, 19 years old, and then eventually I was at the D.C. strategic level,” he says. “A lot of policies are good ideas at the D.C. level, but when you go to execute them at the tactical level they’re not going to work out as written. There needs to be more people involved in the policy-drafting process who have tactical expertise, so we’re not handcuffing anyone on the ground, whether it’s a military commander or somebody at a State Department embassy.”

The presence of a veteran like Gross on campus is itself a step in that direction, Haynie points out. Because of our all-volunteer military, the wars in Iraq and Afghanistan have been shouldered by less than 1 percent of the U.S. population. “This means that when veterans come home and transition to civilian life, they are often anonymous,” he says. “In that regard, having a veteran like Ryan at the Maxwell School is an opportunity to educate those who are otherwise disconnected and unaffected by war, as to the costs and consequences of the decision to leverage military force as an instrument of policy.”

This article appeared in the winter 2018 print edition of Maxwell Perspective © 2018 Maxwell School of Syracuse University.