An ambitious project assessing courts across the globe and their approaches to protected speech also provides opportunities for student research. 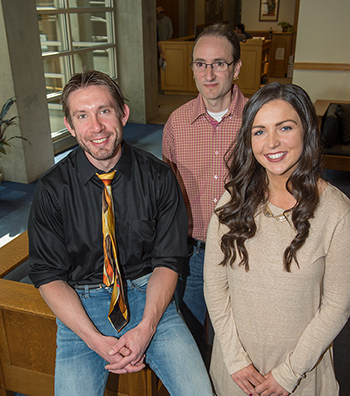 Brandon Metroka and Susanne Prendergast (front, l-r) are two of the 17 students assisting with research for the Global Free Speech Repository, a Tenth Decade project. The project is led by Professor Thomas Keck (rear center).

In the spring semester, Susanne Prendergast, a junior double-majoring in political science and communication and rhetorical studies, was immersed in an analysis of the 2014 U.S. Supreme Court case Wood v. Moss. The case hinged on the allegation that, back in 2004, the Secret Service committed “viewpoint discrimination” by removing anti-war protesters from the vicinity of an Oregon inn where George W. Bush made a campaign stop, while allowing his supporters to remain nearby. The court ruled against the protesters, and Prendergast’s job, guided by political science graduate student Brandon Metroka, was to analyze the First Amendment implications of the case, and then code the results for a database of legal rulings relating to free expression.

“With this kind of constitutional law research, the issues are not black and white, so must be teased out,” says Prendergast. Meeting with Metroka helps her learn “how to categorize a particular issue, and how to think about the true meaning of a Supreme Court decision.”

Prendergast and Metroka are part of an international research team contributing to an ambitious, long-term project called the Global Free Speech Repository, spearheaded by Tom Keck, Maxwell’s Michael O. Sawyer Chair of Constitutional Law and Politics. With major funding from the National Science Foundation, the project is creating a global database of free speech court decisions that will be publicly available online. This work is also supported by a grant from the Tenth Decade Project, a group of initiatives that build on the School’s legacy of citizenship education. Plans for the repository include a book and a conference at Maxwell that brings together the project’s contributors.

Prendergast is one of a dozen Maxwell undergraduates, plus five graduate students, who’ve worked thus far on the repository, in collaboration with researchers at universities around the country and in Germany, Norway, South Korea, Australia, and Canada. As a central goal of the project, Keck says, “We’re committed to getting students involved with high-level, mentored research experiences.”

Prendergast began working on the project in her first semester at SU. “The research experience,” she says, “has helped me become better at reading, analyzing, and synthesizing, which are all really helpful skills for any class I’ve taken.” She plans to apply to law school and dig deeper into constitutional law. “I’m very interested in arguing like a Supreme Court justice.”

Contributing to the repository has been a pivotal experience for Metroka, who just completed his PhD in political science and begins a tenure-track faculty position in Texas in the fall. (Some of his dissertation research was funded also by the Peter and Sharon Murphy Kissel Fund for the Study of Civil Liberties, established at Maxwell in 2008.)

“The most rewarding part for me,” Metroka says, “was to be part of a collaborative team, particularly working with SU undergraduates. They have been engaged and inspiring throughout, and have often brought important issues and questions to my and Tom’s attention that were overlooked initially.”

As an outgrowth of the project, Metroka co-authored a paper with Keck and Richard Price ’12 PhD (PSc), now a professor at Weber State University, on free speech disputes arising from public criticism of a judge or court — a topic that burst into the news with candidate and then President Trump’s clashes with the judiciary.

This is an early sign of the type of comparative study that the Free Speech Repository will make possible. “There are for sure findings that come out of this ambitious data collection effort that will have relevance for contemporary free expression debates,” says Keck. “We have particular things we want to do with the data, but we also want it to be usable for folks to answer their own questions.”

This article appeared in the spring 2017 print edition of Maxwell Perspective; © 2017 Maxwell School of Syracuse University.