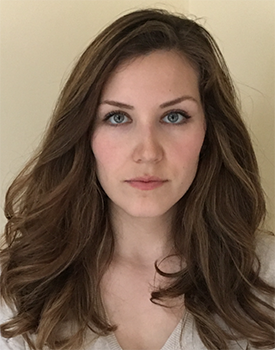 Jade Rhoads’ interest in pursuing an advanced degree in international affairs and working in the Foreign Service began during her service in the military. Rhoads served active duty in the U.S. Marine Corps from 2005-09—stationed at Camp Pendleton, California, and deployed to Iraq during the years of 2006 and 2008, primarily in the Al Anbar region.

As she graduates from SU this spring with a dual major in Russian language, literature and culture from the College of Arts and Sciences and in geography with a minor in global security studies from A&S and the Maxwell School of Citizenship and Public Affairs, she is well on her way to achieving that goal. Rhoads has been named a 2018 Thomas R. Pickering Graduate Foreign Affairs Fellow and plans to attend the Fletcher School of Law and Diplomacy at Tufts University in Medford, Massachusetts, this fall. She is one of only 30 recipients chosen from hundreds of applicants from more than 200 colleges and universities around the nation.

Funded by the U.S. Department of State and administered by the Washington Center, the Pickering Fellowship awards recipients two years of financial support, mentoring and professional development to prepare them for a career in the Foreign Service. Fellows also complete a domestic internship at the U.S. Department of State in Washington, D.C., and an overseas internship at a U.S. embassy.

Rhoads says her military service inspired her academic and career trajectory. “My service inspired my pursuit of security studies because I feel I have a lot to offer regarding the understanding of the human dimension of security,” Rhoads says. “I had the honor of participating in the Lioness mission (the Marine Corps Female Engagement Team) on both of my deployments. I enjoyed learning how to navigate the intricacies of Iraqi culture while still keeping in mind our security measures. I think finding that balance of being culturally appropriate but still completing your goal is what makes global security studies so appealing to me—that there is that human aspect to it.”