It all started here: the very first Model League of Nations Assembly (Model UN) was held at Maxwell

Almost a century ago, a Maxwell faculty member turned a top-of-the-head idea into a student exercise in diplomacy—and basically invented Model UN.

In what’s become a bit of a tradition, Maxwell’s Model United Nations team did extremely well this spring in New York City, where more than 5,000 students from around the world took part in this annual, high-profile simulation of international diplomacy. The 19-member Maxwell team was named a top delegation and 11 members won individual awards for advocacy and position papers.

Maxwell has sent Model UN teams for at least two decades, but participation has been especially fertile in recent years, owing in no small measure to team advisor Francine D’Amico, a teaching professor of international relations. Her enthusiasm for Model UN is virtually boundless. So imagine her astonishment when, out of the blue, staff at the National Model UN informed her the program likely got its start at Maxwell as a model assembly of the League of Nations.

“So far as can be ascertained, this is the first time that a model of assembly of the League of Nations has been held.”

She did some research and soon learned the suggestion was true. Syracuse University archives hold a program for a 1927 conference, along with organizing documents and an exhaustive post-event report. “So far as can be ascertained,” reads a special SU Bulletin, “this is the first time that a model assembly of the League of Nations, participated in by a number of universities, has been held in the United States.”

Those words were written by H. Duncan Hall, an Australian scholar whose research focused on the devolving British empire and on Pacific power shifts. Hall had joined the Maxwell faculty in 1926 (the School’s third year of existence) as a professor of international relations. He was among those scholars who felt the field of political science could do more to account for an “international society.” The story goes (according to a chapter on Hall in The Australian School of International Relations) that one day Hall was asked at a Maxwell faculty meeting for ideas to improve the citizenship program. Spur of the moment, he suggested a student conference on the League of Nations. (Like many scholars, Hall was an enthusiastic proponent of the League, frustrated by America’s refusal to join.) Dean William Mosher apparently liked Hall’s idea. D’Amico speculates that the faculty viewed it as a “chance to get students more practical, hands-on experience — a practitioner’s view,” which D’Amico describes as “a hallmark of this school.”

Colleges closest to Syracuse were invited. Agendas and a preparatory bibliography were sent two months in advance. The assembly itself took place in Slocum Hall, on April 29-30, 1927, with 74 delegates from 11 upstate New York colleges representing 18 nations. Issues ranged from armaments to opium trafficking. According to Hall’s report, students spoke freely and yet maintained the decorum and “realism” of a League simulation. Some teams, with the organizers’ encouragement, included international students hailing from the represented nations. A Cornell delegation that included at least four Chinese students argued for more equal treatment of that nation. The entire event doubled as the semester-ending session of the freshman citizenship course.

Hall left Maxwell later that year, taking a job, in fact, with the League of Nations, but his program continued, with the location rotating among participants. It again landed at Maxwell in 1932, with at least 25 colleges from across the Northeast representing more than 40 nations. Topics included Iraq’s impending independence and the Sino-Japanese conflict. By 1943, the program had evolved into the first-ever Model UN, held at Hamilton College.

This year’s Maxwell team, like the first, represented Poland. During opening ceremonies, they listened to Michael Eaton, executive director of National Model UN, identify Syracuse as the “founding delegation” of the program. “The students just beam when he says that,” D’Amico reports. In what will become another tradition, she had coached them beforehand not to overreact. “Be decorous,” she said. “Be happy, but act professionally.” Ninety years ago, a one-year-only faculty member turned a top-of-the-head idea into a student exercise in diplomacy - and basically invented Model UN.

Williams Weighs in on Looming Stalemate in Ukraine, Expanding Coalition of Nations in New York Times 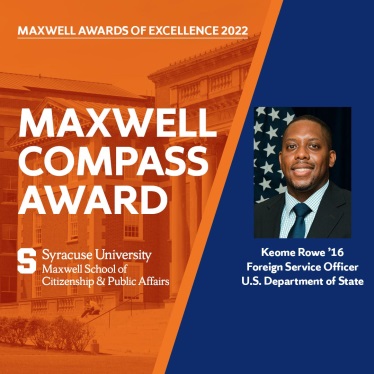