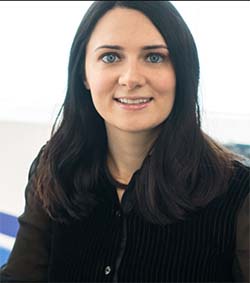 Introduced in fall 2013, the Generation Orange Award recognizes alumni who have made an impact on campus and in their communities through volunteer work and philanthropy on behalf of Syracuse University.

Sacks graduated with a bachelor’s degree in psychology and sociology from the College of Arts and Sciences and the Maxwell School of Citizenship and Public Affairs. She later earned a master’s degree in family therapy from Drexel University before beginning her career as a counselor.

Sacks assisted individuals and groups of patients as a counselor at the Thomas Jefferson University Narcotic Addict Rehabilitation Program, specializing in the treatment of adult patients with mental health and substance use disorders. She also practiced pre-marital counseling at a local synagogue and provided therapeutic support to men undergoing cancer treatment at the University of Pennsylvania.

In 2015, Sacks made the transition to the world of sports as a player development and rehabilitation consultant for the Philadelphia 76ers. Working in conjunction with Creative Artists Agency, Sacks currently leads the management team for Joel Embiid, a Philadelphia 76er, who earned a spot on the National Basketball Association’s (NBA) All-Rookie First Team following the 2016-17 season.

A devoted and passionate SU alumna, Sacks has served as club president of the Syracuse University Alumni Club of Philadelphia since 2012, and was also the club’s treasurer. She formerly held an ex-officio position for the SU Alumni Association Clubs Committee, and frequently participates in prospective student interviews for the Office of Admissions.

Sacks lives in Philadelphia with her husband, Jonathan Sacks ’08. The two met during their freshman year at SU. Three years ago, Sacks took her love of SU abroad by starting a partnership with Arawjo Tours to coordinate alumni trips around the world to places like Krakow, Poland, and Madrid and Barcelona, Spain. The next alumni trip is to Ireland in May and will be aptly named “The Luck of the Orange.”