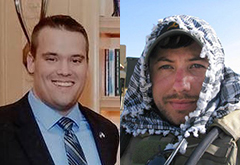 Maxwell graduate students Mitch Forbes and Chris Tonsmeire, both U.S. military veterans, have been named as this year’s SoldierStrong scholars, under terms of a scholarship the SoldierStrong Foundation provides to veterans at the School. Forbes is pursuing an Executive MPA, having previously earned from Maxwell a BA in policy studies, and Tonsmeire is a first-year MA student in international relations.

The SoldierStrong scholarship program supports U.S. military veterans wishing to pursue higher education opportunities as civilians upon their return from service abroad. As part of its larger commitment to improving the lives of armed forces veterans, the SoldierStrong Foundation funds a SoldierStrong endowment at the Maxwell School, providing awards to fill tuition gaps the Post-9/11 GI Bill may leave. Recipients are named by the foundation, based on nominations from the School.

SoldierStrong is the brainchild of Christopher Meek, a philanthropist and businessman who co-founded the nonprofit in 2009 as SoldierSocks, whose initial mission was to provide supplemental clothing and supplies to soldiers serving overseas. Meek is a Maxwell School graduate, with a BA in economics and political science (1992); and a member of the Maxwell Advisory Board.

Mitch Forbes is a Texas native who joined the Army in 2012 and was assigned to the 10th Mountain Division as an 11B Infantryman. Forbes was deployed to Logar Province in Afghanistan, where his platoon was ambushed and Forbes was wounded by enemy small arms fire. After undergoing dozens of surgical procedures while recovering at Walter Reed Military Medical Center, Forbes was medically retired from the Army, came to Syracuse University, and earned his BA in policy studies.

Chris Tonsmeire began his military career after his freshman year of college, enlisting in the U.S. Army Reserves as a combat engineer assigned to the 841st Combat Engineer Battalion (Wheeled).  Shortly after the events of September 11, 2001, Tonsmeire received a release from the Reserves in order to join the Army Special Forces, with which, as a member of the 7th Special Forces Group (Airborne), he served two combat tours in support of Operation Enduring Freedom. During his second tour, he was wounded in action and was unable to remain an active member of Special Forces. In 2009, he separated from the military to continue his education. During his service, he earned the Bronze Star, Purple Heart, and Combat Infantryman’s Badge.

“The SoldierStrong program has allowed a group of very deserving veteran students at the Maxwell School and other institutions to pursue high-value degree programs, which will allow them to continue their public service,” says Robert B. Murrett, professor of practice in public administration and international affairs who oversees the program at Maxwell. “Mitch Forbes and Chris Tonsmeire join three prior SoldierStrong Scholars at Maxwell — Jordan Robinson, Samuel Orlan, and Jesse Campion — all of whom have remarkable records of service and continued strong dedication to the nation.”