MPA grad turned Excelsior Fellow: 'It’s an honor to work with the state' 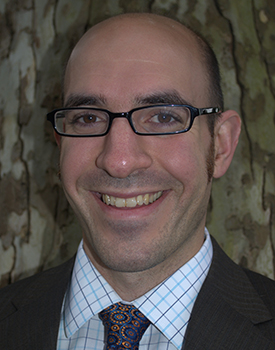 “I was interested in community-building activities and wanted to get involved in shaping and improving the institutions around me,” he said. “Nothing does that like the government.” He completed his M.P.A. in 2014 and was accepted into New York’s two-year Excelsior Service Fellowship Program.

The program was founded in 2013 to introduce recent law, graduate and professional school graduates to policy jobs in New York state government. Epstein is among 24 Maxwell alumni named Excelsior Fellows, who are assigned to New York’s Executive Chamber, a government agency or authority. Exceptional fellows are invited to work for state agencies after the fellowship ends.

In 2019, Epstein was named the first chief data officer for the New York State Department of State. The job brings together his IT background and interest in local government and policy in projects that involve local government technology, innovation and policy.

Maxwell’s connection with the Excelsior Fellowship program reflects its commitment to preparing students for state and local government jobs. It’s among multiple initiatives at several of our leading institutes and centers that contribute to domestic and international efforts to enhance public service delivery, strengthen communities and improve citizens’ lives.

“In government, it’s often difficult to be strategic because you're so consumed by the fire of daily challenges,” Epstein said. “Data management helps you create broad systems before a crisis hits.”

In 2014, Epstein held brief Excelsior Service Fellow positions in the state’s Office of Information Technology Services and Office of General Services. In 2015, he moved to the New York Department of State, where he was named special assistant in 2017. “I wanted to work in local services,” he said, and the state’s growing interest in data management “really drew me. There was a vision for incorporating data management into operations.”

Projects assisting local government officials on issues such as building codes, land use policies and municipal consolidation matched Epstein's interest in local government and interagency efforts. “Everything that’s important in our society, government has a hand in,” he said.

Epstein’s data management skills were in demand during the COVID-19 pandemic. He was part of the state’s “technology SWAT team” in spring 2020. “We all shut down abruptly,” he said. “A 500-person organization had to figure out how to work remotely. On the technology front, this showed the need to have more agile practices.”

He’s eager to help the state create systems to collect and publish more and better data—a trend he sees in demand at all levels of government. “They want to achieve those big goals, but somebody has to figure out how we make that work on the ground,” he said.

“I did not early in my life envision working for the state,” he said. But he’s pleased that his Excelsior fellowship landed him there. “I’m a lifelong New Yorker and very proud of it. It’s an honor to work with the state.”