Madeleine ‘Maddy’ Hamlin was one of 8 doctoral students to have been named an H.F. Guggenheim Emerging Scholar.

Madeleine “Maddy” Hamlin ’17 M.A. (Geog)/M.P.A. says a books-for-inmates program she was involved in as a high school student in Urbana, Illinois, was the early spark that ultimately led to research focusing on urban issues ranging from public housing to mass incarceration.

That early passion has led to a prestigious national award. Hamlin, who is now pursuing a Ph.D. in geography at the Maxwell School, is among just eight doctoral candidates nationwide to be named a 2021 Harry Frank Guggenheim Foundation Emerging Scholar. The $25,000 award supports and recognizes promising graduate-student researchers in their final year of writing a doctoral dissertation. 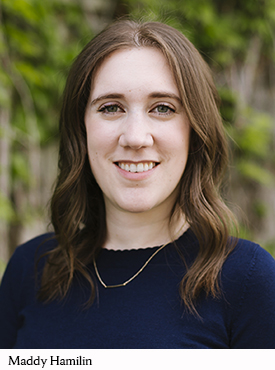 Hamlin’s dissertation focuses on issues of public housing violence in Chicago and challenges long-held views that widespread violence in “the projects” must be blamed on the people who live there or on poorly designed living environments. “In contrast,” she writes in her project overview, “my work shows that police violence often precipitated community violence and lawlessness in public housing projects, rather than followed it.”

Hamlin says her research suggests public housing’s decline in Chicago and elsewhere “instead reflects some of the many failures of modern policing.”

Guggenheim scholars are working to advance knowledge of the causes, manifestations and control of violence around the world, the foundation says. Priority was given to those whose research addresses “urgent, contemporary problems of violence—how it originates, what sustains it, and what reduces it.”

“Maddy is one of strongest students I’ve ever worked with,” says Jamie Winders, professor of geography and the environment and one of her dissertation advisors. “Her research and teaching on policing, housing, law and race prioritize topics that have profoundly shaped the development of political struggles in U.S. cities…her work is incredibly important not just to academia, but also to the communities with which she works.”

Hamlin received her bachelor’s degree from the University of California at Berkeley in 2011, with a double major in English and peace and conflict studies. She worked for three years in the publishing industry before returning to school to pursue dual masters in geography and public administration at Maxwell.

She lauds Maxwell faculty, including Winders as well as her advisor, Don Mitchell, Distinguished Professor Emeritus of Geography and the Environment. She says several others supported her as she developed her dissertation, including Jonnell Robinson, associate professor of geography and the environment, and Gretchen Purser, associate professor of sociology.

“The mentoring I’ve received has been incredible,” she says.

Tom Perreault, professor and chair of geography and the environment at Maxwell, calls Hamlin a “remarkable and a fantastic student” and admires her research, “a real mix of academic work, but that is very directly policy-oriented.”

He says Hamlin has the ability to work in the academic and policy-making worlds, and envisions she may do both. “Her work is the best of what the Maxwell School represents,” Perreault says.

Hamlin says she’d love to ultimately teach full time and does believe in research that has an impact beyond academia.

“I hope my dissertation will be useful to scholars and the wider public,” she says. “I’ve really found an intellectual home in geography. It is a small field in the U.S., yet one I think is important and well-positioned to tackle some of the major issues we’re facing, from climate change to mass incarceration.”