A Glass Half Full? Rebalance, Reassurance, and Resolve in the U.S.-China Strategic Relationship 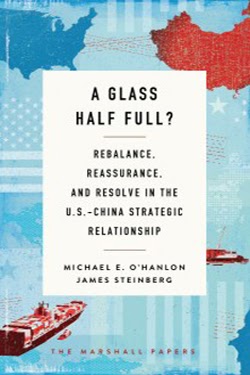 The U.S.-China relationship has not always been smooth, but since former President Richard Nixon’s opening in the early 1970s, the two countries have evolved a relationship that has been generally beneficial to both parties. Economic engagement and a diplomatic partnership together with robust trade and investment relations, among other activities, have meant a peaceful context for reform and China’s rise, helping to lift millions of Chinese out of poverty and giving the PRC incentive to work within the U.S.-led global order.

The logic of the relationship, however, is now open to serious debate on both sides of the Pacific. After a period of American preoccupation with the Middle East, former President Obama attempted a rebalancing of U.S. interests toward the Asia-Pacific region. With the Trump administration in office, the U.S.-China relationship appears to be at a crossroads: does it continue to focus on constructive engagement and managing differences, or prepare for a new era of rivalry and conflict?

Here, following up on their 2014 book, "Strategic Reassurance and Resolve," the authors provide a more balanced assessment of the current state of relations and suggest measures that could help stabilize the security relationship, without minimizing the very real problems that both Beijing and Washington must address. The authors are hopeful, but are also under no illusions about the significance of the challenges now posed to the bilateral relationship, as well as regional order, by the rise of China and the responses of America together with its allies.

Abdelaaty Talks to CNN, Mother Jones About Why Countries Embrace Some Refugees but Not Others

McDowell Discusses Impact of Western Sanctions on Russia in Hill Times, War on the Rocks