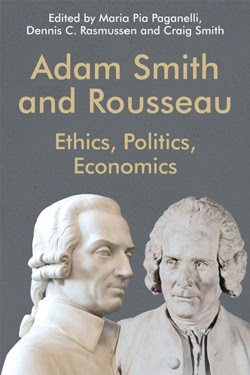 This collection brings together an international and interdisciplinary group of Adam Smith and Jean-Jacques Rousseau scholars to explore the key shared concerns of these two great thinkers in politics, philosophy, economics, history and literature. Rousseau (1712–78) and Smith (1723–90) are two of the foremost thinkers of the European Enlightenment. They both made seminal contributions to moral and political philosophy and shaped some of the key concepts of modern political economy.

Among Smith’s first published works was a letter to the Edinburgh Review where he discusses Rousseau’s "Discourse on the Origin of Inequality." Smith continued to engage with Rousseau’s work and to explore many shared themes such as sympathy, political economy, sentiment and inequality. Though we have no solid evidence that they met in person, we do know that they shared many friends and interlocutors. In particular, David Hume was Smith’s closest intellectual associate and was also the one who arranged for Rousseau’s stay in England in 1766.