Adam Smith and the Death of David Hume: The Letter to Strahan and Related Texts 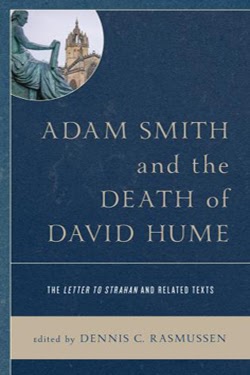 "The Letter to Strahan" is an ostensible letter that Adam Smith wrote on the last days, death, and character of his closest friend, the philosopher David Hume, and published alongside Hume’s autobiography, "My Own Life," in 1777. Other than his two books, it is the only work that Smith published under his name during his lifetime, and it elicited a great deal of commentary and controversy. Because of Hume’s reputation for impiety, Smith’s portrayal of his friend’s cheerfulness and equanimity during his final days provoked outrage among the devout. Smith later commented that this work “brought upon me ten times more abuse than the very violent attack I had made upon the whole commercial system of Great Britain”—meaning, of course, "The Wealth of Nations."

This is the first annotated version of this fascinating and important work. Along with the "Letter to Strahan," the volume also includes Hume’s "My Own Life," the work to which the Letter was a kind of companion piece; two personal letters related to the Letter; and three published responses to the Letter—two viciously critical and one generally favorable. A substantial editor’s introduction discusses the context, composition, publication, and significance of the Letter, along with the strong reaction that it provoked. Taken together, the works included in the volume provide an entertaining and accessible entrée into some of the most controversial debates over religion and morality in the 18th century.