Branching Out, Digging In: Environmental Advocacy and Agenda Setting 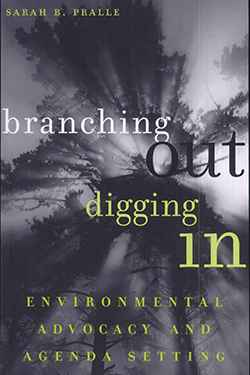 Sarah Pralle, associate professor of political science, takes an in-depth look at why some environmental conflicts expand to attract a lot of attention and participation, while others generate little interest or action. "Branching Out, Digging In" examines the expansion and containment of political conflict around forest policies in the United States and Canada.

Late in 1993 citizens from around the world mobilized on behalf of saving old-growth forests in Clayoquot Sound. Yet, at the same time only a very few took note of an even larger reserve of public land at risk in northern California. Both cases, the Clayoquot Sound controversy in British Columbia and the Quincy Library Group case in the Sierra Nevada mountains of northern California, centered around conflicts between environmentalists seeking to preserve old-growth forests and timber companies fighting to preserve their logging privileges. Both marked important episodes in the history of forest politics in their respective countries but with dramatically different results.

The Clayoquot Sound controversy spawned the largest civil disobedience in Canadian history; international demonstrations in Japan, England, Germany, Austria, and the United States; and the most significant changes in British Columbia's forest policy in decades. On the other hand, the California case, with four times as many acres at stake, became the poster child for the "collaborative conservation" approach, using stakeholder collaboration and negotiation to achieve a compromise that ultimately broke down and ended up in the courts.

Pralle analyzes how the various political actors—local and national environmental organizations, local residents, timber companies, and different levels of government—defined the issues in both words and images, created and reconfigured alliances, and drew in different governmental institutions to attempt to achieve their goals. She develops a dynamic new model of conflict management by advocacy groups that puts a premium on nimble timing, flexibility, targeting, and tactics to gain the advantage and shows that how political actors go about exploiting these opportunities and overcoming constraints is a critical part of the policy process.