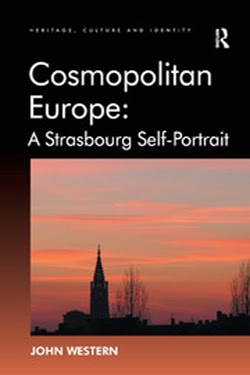 The past hundred years of Europe are distilled in the experiences of the citizens of Strasbourg. From the turn of the twentieth century until 1945, Europe's ruling idea of nationalism rendered Strasbourg the prize in a tug-of-war between the two greatest continental powers, France and Germany.

Then, in the immediate post-war period, ideals for European unity set up various European institutions, some headquartered in Strasbourg, which have gradually created a partially supranational Europe. At the end of the 1950s, a third theme arises: the large-scale settling in Strasbourg and other such richer, western European cities of persons from poorer lands, frequently ex-colonial territories, whose appearance and cultural practices render them essentially "different" to local eyes: expressions of racism thereby jostle with professions of multiculturalism. Now in the globalisation era, the issue of "immigration" has broadened yet further into transnationalism: the experience of persons who are embedded in varying manner in both Strasbourg and in their land of origin.

Based on in-depth, lively interviews with 80 men and 80 women ranging from 101 to 20 years, and from all over the world (France, Germany, Alsace-Lorraine, Portugal, Italy, ex-Yugoslavia, Albania, Algeria, Morocco, Turkey, Cameroon, and Afghanistan amongst other countries), the author draws out of these compelling testimonies all sorts of compelling insights into issues of identity, race, nationality, culture, politics, heritage and representation, giving a unique and valuable view of what it means (and has meant over the past century) to be a European.