Eunuch and Emperor in the Great Age of Qing Rule 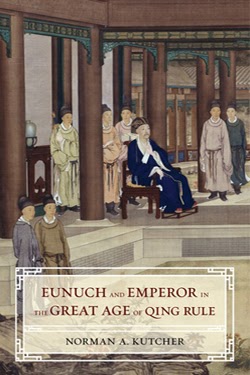 In his new book, Norman Kutcher, professor of history and Laura J. and L Douglas Meredith Professor for Teaching Excellence, offers the first in-depth exploration of the lives and works of Chinese eunuchs, men who served the Chinese emperor, sometimes in menial roles, sometimes as major advisors and political figures. The book, Eunuch and Emperor in the Great Age of Qing Rule, published by University of California Press, draws on Kutcher’s many years of research and study of China’s last dynasty, the Qing (1644–1911). In the book, Kutcher offers an intimate portrait of Qing court life, one based not on published sources that described how the court was supposed to function, but on archival documents preserved in Chinese archives that show how the system truly operated.

Kutcher is a leading scholar of late imperial and modern China, with a keen interest in the Qing dynasty. Kutcher’s research has been published in such venues as the Journal of Asian Studies, the American Historical Review, and the Harvard Journal of Asiatic Studies. He has received major grants from the Mellon Foundation, the American Council of Learned Societies, the Institute for Advanced Study, and the National Humanities Center. Kutcher is also author of Mourning in Late Imperial China: Filial Piety and the State (Cambridge University Press, 1999).

"Eunuch and Emperor in the Great Age of Qing Rule" offers a new interpretation of eunuchs and their connection to imperial rule in the first century and a half of the Qing dynasty (1644–1800). This period encompassed the reigns of three of China’s most important emperors, men who were deeply affected by the great eunuch corruption of the fallen Ming dynasty.

In this groundbreaking and deeply researched book, Norman Kutcher, professor of history, explores how Qing emperors sought to prevent a return of the harmful excesses of eunuchs and how eunuchs flourished in the face of the restrictions imposed upon them. We meet powerful eunuchs who faithfully served, and in some cases ultimately betrayed, their emperors. We also meet ordinary eunuchs whose lives, punctuated by dramas large and small, provide a fascinating perspective on the Qing palace world.