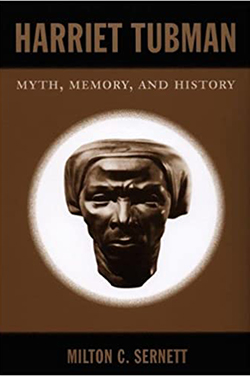 Harriet Tubman is one of America’s most beloved historical figures, revered alongside luminaries including Abraham Lincoln and Frederick Douglass. "Harriet Tubman: Myth, Memory, and History" tells the fascinating story of Tubman’s life as an American icon. The distinguished historian Milton C. Sernett compares the larger-than-life symbolic Tubman with the actual “historical” Tubman. He does so not to diminish Tubman’s achievements but rather to explore the interplay of history and myth in our national consciousness.

Analyzing how the Tubman icon has changed over time, Sernett shows that the various constructions of the “Black Moses” reveal as much about their creators as they do about Tubman herself. Three biographies of Harriet Tubman were published within months of each other in 2003–04; they were the first book-length studies of the “Queen of the Underground Railroad” to appear in almost sixty years. Sernett examines the accuracy and reception of these three books as well as two earlier biographies first published in 1869 and 1943. He finds that the three recent studies come closer to capturing the “real” Tubman than did the earlier two.

Arguing that the mythical Tubman is most clearly enshrined in stories told to and written for children, Sernett scrutinizes visual and textual representations of “Aunt Harriet” in children’s literature. He looks at how Tubman has been portrayed in film, painting, music, and theater; in her Maryland birthplace; in Auburn, New York, where she lived out her final years; and in the naming of schools, streets, and other public venues. He also investigates how the legendary Tubman was embraced and represented by different groups during her lifetime and at her death in 1913. Ultimately, Sernett contends that Harriet Tubman may be America’s most malleable and resilient icon.