Mothers in Poverty: A Study of Fatherless Families 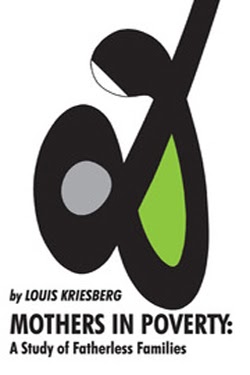 Professor Louis Kriesberg explores in this book the many myths about the poor, the welfare dependents, and the husbandless mothers. The evidence marshalled does not support the idea that people continue on welfare generation after generation, that the children of broken families have disrupted marriages themselves, that the poor seek out public housing and public assistance because they prefer such dependency, or that husbandless mothers all have lower educational goals for their children than do married mothers.

Beginning with major theoretical issues, Kriesberg developed specific hypotheses about the life of the poor and the culture of poverty; the hypotheses were tested with data from a study of families in and around four public housing projects in Syracuse.

Issues discussed in the book include the social worlds of the housing projects and the relations between the tenants and the residents of surrounding neighborhoods; the recruitment and selection of families into public housing; and the alternatives the female heads of families face in obtaining money for their families. Two chapters are devoted to an analysis of childrearing patterns that affect the child's later independence and educational achievements, focusing upon intergenerational processes and contemporary conditions such as housing, income, and family structure. Here the complex interplay of parental values, beliefs, and actual conduct is studied. Finally the sociological and policy implications of the findings are set forth with specific proposals concerning the reduction of poverty.

This in-depth analysis of poverty with its emphasis on fatherless families will be of interest to sociologists and social workers and those concerned with poverty, employment, women's rights, civil rights, education, and urban development.