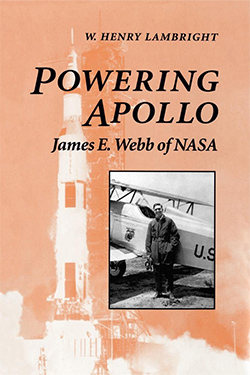 From archival evidence and interviews with space agency officials, an in-depth investigation into the relationship between the performance of the American space program and NASA's organizational culture. When President Kennedy issued his well-known challenge to reach the moon and return safely before the end of the 1960s, the immediate responsibility for undertaking the task fell to 54-year-old NASA director James E. Webb. Eight years later, when the Apollo 11 spacecraft splashed down safely in the Pacific and the screens in NASA's Mission Control at Houston flashed the words "Task Accomplished," it was Webb who deserved much of the credit.

In "Powering Apollo," Professor W. Henry Lambright explores Webb's leadership role in NASA's spectacular success—success that is rare in ambitious government policies and programs. A North Carolina native and Congressional staff member, Jim Webb had served in Congress, worked in the Truman administration, and risen to high office in the defense and energy industries by 1961 when Kennedy named him to head the new National Aeronautics and Space Administration.

Examining Webb's role as both Washington insider and government program director, Lambright probes the skills and experience that equipped him to handle his enormous responsibilities. He also shows how Webb's performance reflected important changes in twentieth century public life, including the concentration of political power in Washington; expansion of the federal bureaucracy; the rise of big science; and visions of cooperation among government, industry, and higher education.