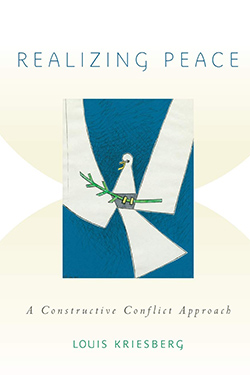 First, this book critically examines major episodes of U.S. government engagements in foreign conflicts since the beginning of the Cold War. This includes engagements in struggles against adversaries, interventions among adversaries, and mediations between adversaries. Second, it also examines the efforts of nongovernmental organizations in advancing peace in foreign conflicts. Third, it traces and applies the developing fields of peace studies and conflict resolution, synthesized in the constructive conflict approach, to evaluate those American engagements.

The approach provides research findings and insights to make such assessments and to suggest alternative strategies that would be more effective and yield more beneficial results than did many of the strategies that had been pursued. A major set of episodes discussed in this book pertain to Americans’ engagement in the Cold War itself, through episodes of escalations and de-escalation, its final transformation, and subsequent American-Russian contentions. Multiple analyses also relate to conflicts with Panama, al Qaeda, Iraq, North Korea, and Iran. In addition, interventions in Yugoslavia, Haiti, and elsewhere are examined.

Finally, several mediation efforts in the Israeli-Arab/Palestinian conflicts are critically discussed. The analyses incorporate consideration of the American political circumstances and the evolving global context.