They Saved the Crops: Labor, Landscape, and the Struggle over Industrial Farming in Bracero-Era California 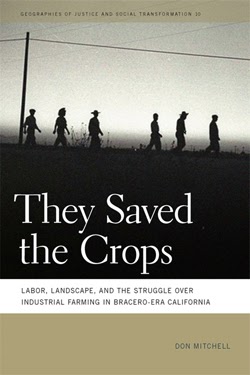 At the outset of World War II, California agriculture seemed to be on the cusp of change. Many Californians, reacting to the ravages of the Great Depression, called for a radical reorientation of the highly exploitative labor relations that had allowed the state to become such a productive farming frontier. But with the importation of the first braceros-"guest workers" from Mexico hired on an "emergency" basis after the United States entered the war-an even more intense struggle ensued over how agriculture would be conducted in the state.

Esteemed geographer Don Mitchell argues that by delineating the need for cheap, flexible farm labor as a problem and solving it via the importation of relatively disempowered migrant workers, an alliance of growers and government actors committed the United States to an agricultural system that is, in important respects, still with us.

"They Saved the Crops" is a theoretically rich and stylistically innovative account of grower rapaciousness, worker militancy, rampant corruption, and bureaucratic bias. Mitchell shows that growers, workers, and officials confronted a series of problems that shaped-and were shaped by-the landscape itself. For growers, the problem was finding the right kind of labor at the right price at the right time. Workers struggled for survival and attempted to win power in the face of economic exploitation and unremitting violence. Bureaucrats tried to harness political power to meet the demands of, as one put it, "the people whom we serve."

Drawing on a deep well of empirical materials from archives up and down the state, Mitchell's account promises to be the definitive book about California agriculture in the turbulent decades of the mid-20th century.