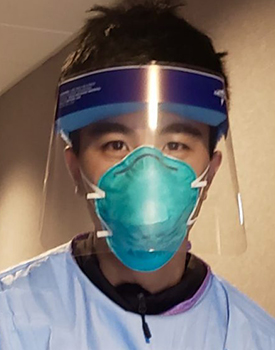 During Brian Kam’s senior year at Syracuse University, he volunteered as a disaster relief worker through an alumni-founded nongovernmental organization (NGO) in Nepal after the Gorkha earthquake in 2015. The devastation in Nepal was widespread. Thousands were killed or left homeless instantly. Seeing how these remote communities struggle with little to no national infrastructure changed Kam forever.

When he returned to campus in 2015, Kam founded Thrive Projects Inc. with fellow Syracuse University students Ryan Brinkerhoff ’16 and Joshua Moon ’16. The Marine Corps veteran wanted to continue to serve people in dire situations, no matter how difficult it was to reach them. He wanted the organization to work with communities to develop sustainable solutions to their biggest obstacles. Since its founding, Thrive has worked in disaster-stricken areas of Nepal and Haiti on projects related to first aid, community health and sustainable energy.

While the Nepal experience inspired Thrive to help communities in a macro sense, Kam also wanted to work with people individually—inspired by the medical personnel he watched in relief camps, particularly a nurse named Billie. “She showed an unimaginable amount of compassion, patience and endurance dealing with patients,” he says. Kam recognized that while it was great to respond to an emergency, without medical skills his role would be limited. He was determined to do what was needed to make an impact like Billie. “I talked to her many times about whether I should be a nurse,” he says.

Kam decided nursing school was his best opportunity to combine his passion for helping others with tangible medical experience, and he recently took the state license exam to become a registered nurse and completed the University of Rochester’s accelerated nursing program. “Billie had a lot to do with it,” says Kam. “She really defined what a nurse is.”

Operating Outside His Comfort Zone

Kam says nursing school was intense and humbling. “At first, I underestimated how hard it was going to be,” he says. “My classmates had patient care and tech experience, and science-based degrees. It really intimidated me.” Kam is accustomed to being outside of his comfort zone. He immigrated with his family to Rochester, New York, at age 11 from Hong Kong. He did not speak English and graduated 490th in a high school class of 500. He enlisted in the Marine Corps at age 17 and served in the Iraq War and post-Katrina New Orleans.

Kam has a passion for serving others. The Marine veteran helped found Thrive Projects Inc. in Syracuse University's Blackstone LaunchPad, a nonprofit that has since provided aid in Nepal and Haiti.

After honorably discharging at age 22, Kam enrolled at Syracuse University five years later to study international relations. He worried about fitting in with students who were a decade younger. But he opened his mind and worked with peers at the Maxwell School of Citizenship and Public Affairs and the Blackstone LaunchPad powered by Techstars. At the LaunchPad, a workspace and business incubator in Bird Library, Kam was able to access the University’s resources and global network that supports aspiring innovators, inventors and creators. The program serves faculty, staff, students and alumni across all disciplines. There he encountered a level of dedication that impressed him. Watching cofounders Brinkerhoff and Moon be fully invested in Thrive and share his vision helped Kam erase his negative preconceptions. “I saw my own biases and I overcame those,” he says. “And then when we collaborated, I really saw just how powerful that was.”

Learning how to collaborate was essential to Kam’s success in nursing school. “In a hospital environment, I’m going to be a part of a team, and I don’t have to go at it alone,” he says. “I have to rely on my team to give the patient the best possible outcome.”

There were many times the difficulty of nursing school left Kam feeling overwhelmed. In these instances, he would fall back on the mentorship he received at Blackstone LaunchPad. “I’ve learned a lot from my entrepreneurial journey,” he says. His Syracuse mentors impressed on him the importance of networking and being ambitious. Whenever the seemingly endless complications of developing an international NGO left him feeling unsure of himself, Kam’s mentors helped him concentrate on his values instead of the results. “I wanted to give up so many times because I was pushing something that wasn’t profit-driven,” he says. “I was goal-driven before, but when I started to see how many challenges and obstacles there were, I realized how laser-focused I had to be.”

Kam used that same mentality to complete nursing school and will be working in a pediatric emergency department at Golisano Children's Hospital at Strong Memorial in Rochester. “Being able to adapt, overcome and roll with the punches in nursing school has helped me understand how I’m going to succeed as a nurse in the future,” he says.

His past experiences as an immigrant, Marine, student entrepreneur and disaster relief worker all contributed to his growth. “It was an evolving process,” he says. “All of the skills I learned were part of my development.”

Kam says he is excited to combine his discipline, empathy and compassion with his desire to serve. “I want to step up even more and do the best I can to intervene in a crisis and help drive positive patient outcomes.”