Citizens of the World

Citizens of the World

Students of the Maxwell School hail from around the planet, which assures a global experience not only for them, but for everyone who enters a classroom. 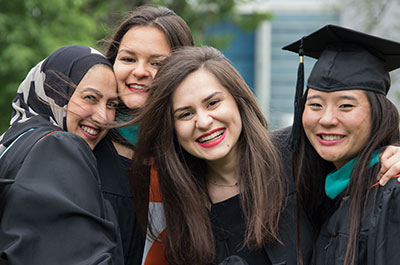 At Maxwell's graduate convocation in May, David Van Slyke, dean of the School, was approached by a graduate student named Ekaley Joulia, who described her international resume. She was a native of Niger, in America as a Fulbright scholar, pursuing a Maxwell MPA. She previously completed secondary school in the United Kingdom and an undergraduate degree in the Netherlands. Then, according to Van Slyke, she said this: "I've never been in a more internationally oriented environment in my life than here. I can't believe I'm having such a vibrant international experience in Syracuse." As dean of the School, Van Slyke couldn't have been happier.

The dean sees it within his charge – and that of the faculty – to nurture an internationally diverse environment. It's important to any institution of higher learning, but especially Maxwell.

"The presence of international students," Van Slyke says, "enhances the educational experience. It makes us more inclusive and introduces a range of viewpoints on the many issues that don’t stop at sovereign borders."

Andrew London, associate dean and a sociologist, remembers witnessing this effect while he was a PhD student at another school, taking part in a program on African demography. A conversation about desirable population reduction was challenged by the African scholars on hand, who offered deeply contrary views, letting them know that Africans wouldn't all agree. It's a lesson he's carried forward, now as a member of Maxwell leadership. "So many of the issues we care about are global phenomena that need multinational cooperation," says London.

"So many of the issues we care about are global phenomena that need multinational cooperation."
Andrew London

Tanner Day, held October 4, was presented in partnership with the National Academy of Public Administration – Maxwell was one of four schools selected by NAPA to host such events – and made possible by support from W. Lynn Tanner '75 PhD (PA). (Other sponsors were Maxwell's Bantle Chair in Business and Government Policy and Campbell Public Affairs Institute.)

Recently, Syracuse University provided an analysis of Maxwell's international enrollment: 22 percent of undergrads and 32 percent of graduate students are not American; they represent more than 70 nations.

Joulia later reported it was that plurality which most impressed her. Among the quarter of all students who are international, "hardly two people were from the same country," she says. ". . . Even though I have had international educational experiences in the past, the international student body was not as diverse."

This has an essential impact on academic settings, where the faculty, no matter how internationally savvy and experienced, cannot possibly represent all worldviews. "Hearing critiques of the U.S. and its policies that come from non-American students has a different valence in your classroom," says London, "than when it comes from a book."

"An environment that engages all students in dialogue," says Van Slyke, "helps break down media-constructed, social assumptions about countries and their citizens." It helps make the School's mission "come alive" and transcend its location.

The new stats are encouraging, but more could be done, Van Slyke says. Student recruitment must include a robust international component, drawing, in part, on connections to international alumni (whose numbers are naturally increasing). And it is important to support international students when they are here – helping them, for example, to interpret the many historical and cultural references built into a public affairs education, but often alien to such students.

Meanwhile, Joulia, now graduated, is in Mauritius, working for an educational campus associated with a new "smart city."

This article appeared in the winter 2018 print edition of Maxwell Perspective © 2018 Maxwell School of Syracuse University.