Top Democrats are in the process of designing a roughly $1 trillion infrastructure deal, and a second, broader antipoverty package and they need to resolve differences over the amount of spending, how much must be paid for, and which of President Joe Biden’s proposed tax increases should advance. For now, Democrats have a two-bill strategy. The first would pair spending on roads, bridges and infrastructure with a grab bag of revenue-raising provisions that Republicans can accept, including expanded tax enforcement. The second, partisan bill would include other Democratic priorities—such as extending the expanded child tax credit and spending on preschool—and be paired with tax increases. "A lot of Democratic voters are moderate to conservative. A lot of Democratic voters have low trust in government,” says Christopher Faricy, associate professor of political science. "You have to tie it to something that is popular, that you can sell to people that will be an improvement in their day-to-day lives." Read more in the Wall Street Journal article, "Democrats Focus on Turning Tax Talk Into Action." 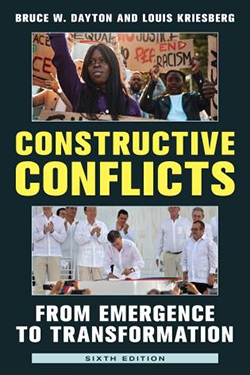 Kriesberg, Dayton Explain How Political and Social Conflicts Can Be Waged Constructively in New Book

Lovely Speaks with The New York Times About US Manufacturing Jobs