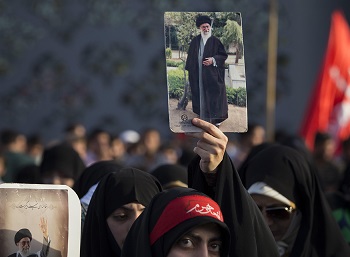 When he looks at the Middle East and North Africa, Mehrzad Boroujerdi counts at least 10 failed or fragile states in the region, from Afghanistan to Mali and Libya. “We learned some hard lessons in Iraq and Afghanistan,” says the professor of political science. “We might have the strongest army in the world, but we have a very poor record in nation building.”

So when he hears talk of rejected diplomacy or increased military action, he hopes cooler heads prevail. “I don’t think we’re going to solve any problems by bombing anyone else,” he adds. “Imagine what one failed state — Afghanistan — did to us, multiplied by 10.”

Boroujerdi is the author of three books on political leadership and intellectual history in Iran, a board member of the Near East Foundation, a trustee of the American Institute of Iranian Studies, and former president of the International Society for Iranian Studies. He considers media and policy-circle analysis of Iran “very subjective,” minimally based in hard data. “As an academic,” he says, “I felt I had to do something about it.”

" I don’t think we’re going to solve any problems by bombing anyone else."
MEHRZAD BOROUJERDI

He created the Iran Data Portal, an online repository of information in English and Persian. Since its launch in 2011, the portal has become the leading site for social science data on post-revolutionary Iran, positioning Boroujerdi as a leading Iran expert in the United States. The portal includes translations of laws, regulations, and fatwas integral to understanding Iranian politics and economics, plus, among much else, governmental budgets, socio-economic data, and electoral data. The portal (which resides at irandataportal.syr.edu) was funded by the Social Sciences Research Council and now receives more than 5,000 page views a month.

Most of the information on the Iran Data Portal is obtained from Iranian websites. This requires continuous updating, as sites in Iran are filtered and typically blocked from access within the United States. Information on Iranian sites can disappear at any time, leaving the portal as the sole remaining source. For instance, reactions to Iran’s 2009 presidential election and protests reside there — a rare historical record of what transpired in that year. “It’s that kind of service that makes this site interesting,” says Boroujerdi, who is a Syracuse University Provost Faculty Fellow for Internationalization.

“For each, I’ve collected 50 fields of data,” he says, pointing to several tall file cabinets containing a file on each leader. “This enables me to assemble the largest database of political elite in the entire Middle East.” This, with the Iran Data Portal, offsets what Boroujerdi views as the “shallowness” of partisan analysis available from other accepted sources.

Boroujerdi is not the only Middle East scholar who feels the region is not well understood. Osamah Khalil, assistant professor of history, says that’s partly due to a growing rift between academic scholars and national security experts. In his book, America’s Dream Palace: Middle East Expertise and the Rise of the National Security State (Harvard University Press), Khalil explains that the creation of university-based Middle East studies programs was driven largely by U.S. national security interests in the region, as has happened with other area studies programs. There was a close alignment between academia and the U.S. government during the decades after World War II. But the Vietnam War created a rift between colleges and government. Private, often partisan, think tanks grew in prominence and, post-9/11, their role in guiding Middle East policy has grown.

“Too often there is a focus on the latest headlines without an understanding or exploration of broader historical trends or underlying issues,” he explains. “This is reinforced by experts with close ties to the U.S. foreign policy establishment and their analysis often reflects America’s interests regionally and globally. As we saw with the war in Iraq, there are long-term implications to this kind of analysis.”

Analysts and the media tend to frame America as a morally superior exemplar of democracy and liberalism, positioning authoritarianism as “other,” a geopolitical identity narrative that Koch says smacks of Orientalism.

In the West, it’s common for hot-topic issues — free speech, for example — to color the view of an entire country. “The West tends to confuse public performance of free speech with ‘there is no free speech,’” Koch says. “In fact, when you go to these authoritarian countries, it actually can feel quite free. There are a lot of spaces for free speech, but they aren’t always the same spaces we have in the U.S.”

There’s also the suggestion that Islamophobia colors thinking on any topic. Yüksel Sezgin, a scholar of Islamic family law in different countries and contexts, is the author of Human Rights under State-Enforced Religious Family Laws in Israel, Egypt and India (Cambridge University Press).

He says the term Sharia, in particular, is a polarizing term. “When people hear Sharia, they think there is one set of laws that applies across the world,” says Sezgin, associate professor of political science and director of the Middle Eastern Studies Program at SU. “Of the 50 Muslim countries in the world, only 33 of them apply Sharia law, and across those, you have 33 variations of the law.”

He says many issues are not unique to Islam or Sharia, but are problems of religious law in general. “It’s really the appropriation of religion by the state that is the problem, which could be Hindu law in India or Christian law in Egypt or Jewish law in Israel,” he says. “Religious authority is often male authority, and when the so-called laws of God are interpreted from a male perspective you see women’s rights violated.”

Sezgin’s next book, tentatively titled Democratizing Shari‘a: How Do Non-Muslim Democracies Apply and Regulate Muslim Family Laws?, examines the only four democracies where Sharia law is formally integrated into the national legal system: Israel, India, Greece, and Ghana. Muslims in these countries are subject to Islamic law, applied directly by the state and enforced by police. “I’m studying how these liberal democracies, which are largely secular regimes, reconcile fundamental human rights with this so-called archaic religious system.”

Israel, of course, stands alone as America’s most reliable ally in the Middle East. Miriam F. Elman, associate professor of political science, is watching to see if President Trump will follow through on his campaign promise to move the U.S. Embassy in Tel Aviv to Jerusalem. Moving the embassy could incentivize the parties to go back to the negotiating table and make the tough compromises necessary for peace, an argument she made in an invited op-ed piece for the Washington Post.

Elman, faculty research director in Maxwell’s Program for the Advancement of Research on Conflict and Collaboration, is co-editor of Jerusalem: Conflict and Cooperation in a Contested City and Democracy and Conflict Resolution: The Dilemmas of Israel’s Peacemaking (both, Syracuse University Press). She writes on Israel for the website Legal Insurrection.

“There is a history of shared sacred space,” she says, pointing to the Tomb of Samuel, where Jews and Muslims conduct prayers simultaneously. “Moving the embassy could create another avenue for sharing,” she says. “Relocating the U.S. and other embassies to west Jerusalem while also expanding consular facilities for Palestinians in east Jerusalem could jump-start efforts to move toward a two-states-for-two-peoples solution,” she says.

It’s not necessarily the relocation that’s important, she says, but creating new symmetries and windows of opportunity. “The peace process is stagnant. We need out-of-the-box thinking to jump-start it, and this could be just the thing.”

This article appeared in the spring 2017 print edition of Maxwell Perspective; © 2017 Maxwell School of Syracuse University. To request a copy, e-mail dlcooke@maxwell.syr.edu.