Hackbarth promoted to director at the American Security Project 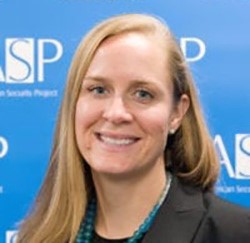 Alexandra Hackbarth ’15 MPA/IR has been named director of climate and energy security at the American Security Project, a Washington, D.C.-based think tank focused on national security issues and the appropriate use of American power.

In this new role, Hackbarth will take on additional leadership tasks while continuing her research on how climate change affects U.S. national security interests around the world. The American Security Project is a non-partisan public policy and research organization that helps cultivate strategies for responding to 21st century challenges. Founded in 2006, ASP aims to restore American leadership around the world in order to enhance national security while working with partners to strengthen security interests around the globe.

Hackbarth joined the American Security Project in 2019 as a climate security adjunct fellow. She was previously a special advisor in the Office of the Special Inspector General for Afghanistan Reconstruction, where she had also spent two years as congressional liaison. Hackbarth has additional government experience as a fellow in the Office of the Under Secretary of Defense for Policy and as a member of Senator Ron Wyden’s staff.

You can read more about Hackbarth’s work in her organization biography.