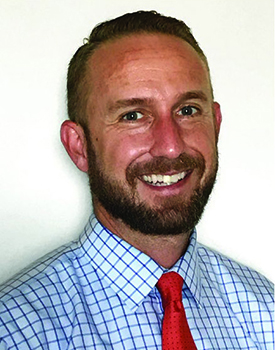 Ryan Gross grew up hearing stories about his grandfathers’ military experiences during World War II, leading tank units through the Battle of the Bulge and serving on a Navy destroyer in the Pacific. Inspired by their service, he accepted a commission in the U.S. Army as a military intelligence officer. After his deployment with an infantry battalion in Baghdad, Gross transitioned from the Army to the Defense Intelligence Agency (DIA), where he leads intelligence analysis.

Gross, an incoming student in Syracuse University’s #1-ranked master of public administration program (MPA) in the Maxwell School of Citizenship and Public Affairs, has been named a 2017 Tillman Scholar in a cohort representing 61 U.S. service members, veterans and military spouses across the nation. The newly named class, funded by the Pat Tillman Foundation, will receive more than $1.1 million in scholarships to pursue higher education degrees.

“These scholars are tackling challenges across national security, healthcare, technology, civil rights and education. They believe their best years of service to our country are still ahead of them, and they are working together to strengthen communities at home and around the world,” Marie Tillman, co-founder and president of the Pat Tillman Foundation said in a statement released on June 8. “In Pat’s spirit of service, we are proud to unite and empower them as our country’s next leaders.”

Gross says he is honored to be selected as a Tillman Scholar and is eager to begin his studies in Syracuse University’s renowned MPA program.

Through his experiences in Baghdad, Washington, D.C., U.S. Central Command, and three civilian deployments to Afghanistan, Gross witnessed how “one size fits all” policies developed at the national level do not always translate effectively to the tactical environment, requiring commanders on the ground to determine how to tailor policies to fit their battlespace. He plans to use his MPA degree to build upon the leadership and decision-making skills he gained through his career and to hone his policy development expertise. His goal is to create flexible, effective policy that will meet military commanders’ and soldiers’ operational needs on the ground.

In 2014, Syracuse University Chancellor Kent Syverud identified four pillars to guide the future growth of the University, one of which was ensuring the University once again became the best institution for veterans and their families. J. Michael Haynie, vice chancellor for strategic initiatives and innovation and the executive director of the Institute for Veterans and Military Families, works closely with Chancellor Syverud on that important effort. He says he is proud of the University’s partnership with the Tillman Foundation and is pleased Gross selected Syracuse University for his academic pursuits.

“Syracuse University is honored to have Ryan as part of our academic community and to celebrate him as our first Tillman Scholar recipient,” says Haynie. “The purpose and mission of the Tillman Foundation aligns well with Syracuse University’s commitment to be the best place for veterans. The education Ryan will receive and the skills he will develop during his time at the Maxwell School will well equip him to inspire positive and impactful changes in military operations.”

The scholarship honors Pat Tillman. In 2002, Tillman, a starting safety for the National Football League’s Arizona Cardinals, put his football career on hold to serve his country. Family and friends established the Pat Tillman Foundation following Pat’s death in April 2004 while serving with the U.S. Army’s 75th Ranger Regiment in Afghanistan. The foundation invests in military veterans and their spouses through scholarship and programmatic support, and is dedicated to building a diverse community of leaders committed to service to others.

Founded in 2008, the Tillman Scholars program supports our nation’s active-duty service members, veterans and military spouses by investing in their higher education. The scholarship program covers direct study-related expenses, including tuition and fees, books and living expenses, for scholars who are pursuing undergraduate, graduate or post-graduate degrees as a full-time student at a public or private, U.S.-based accredited institution. The selection process for the Tillman Scholars program is highly competitive.

Each year, the foundation collaborates with 15 University Partners to identify and select qualified applicants on their campuses for the Tillman Scholar screening process. Syracuse University was named a University Partner in 2016, selected for its innovative veteran services, strong culture of support for military veterans and spouses and its rigorous academic programs.

Syracuse University is a private research university of extraordinary academics, distinctive offerings and an undeniable spirit. With a gorgeous campus in the heart of New York State, a global footprint, and nearly 150 years of history, our University is made for those who want a quintessential college experience. Proudly selective, we take a chance on people who dream big. This is where you come to cheer, to grow and to become the person you want to be. The scope of our University is a testament to its strengths: a pioneering history dating to 1870; a choice of more than 200 majors and 100 minors; nearly 15,000 undergraduates and 5,000 graduate students; more than a quarter million alumni in 160 countries; and a student population from all 50 U.S. states and 123 countries. Syracuse University’s proud commitment to veterans and their families is unrivaled in higher education. From the leading role it played in the original G.I. Bill, to launching the nationally recognized Institute for Veterans and Military Families, the University continues to honor and expand upon this legacy.

The Maxwell School of Citizenship and Public Affairs is Syracuse University’s home for innovative, interdisciplinary teaching and research in the social sciences, public policy, public administration, and international relations. It is the # 1 ranked school in the nation for graduate education in public affairs, offering highly regarded professional degrees alongside advanced scholarly degrees in the social sciences; and it is home also to undergraduate programs across the full spectrum of social sciences.