Innovation in the Salt City

Innovation in the Salt City

As an extension of her work as community geographer, faculty member Jonnell Robinson now serves on Syracuse’s new “innovation team". 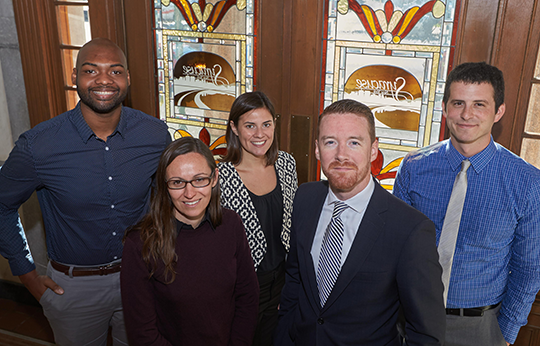 A water main break in early October left businesses in Syracuse’s Armory Square without water and closed at least three restaurants. A few weeks earlier, a break had closed Nottingham High School, creating an unscheduled day off for 1,200 students. In July, a pipe burst on Fayette Street; it was fixed, but the next day city workers tore up those repairs to fix another break on the same block.

The City of Syracuse averages one water main break a day — although, by early October, there had already been 350 this year. Every burst pipe causes lost income and productivity for businesses and institutions, added work and cost for an already under-financed city. Some of the city’s 550 miles of pipe date to 1894. It would cost $726 million to replace them all — toward which the city’s been offered a $10-million grant from New York’s State and Municipal Facility Program.

To help the city better understand its water-main challenges, students at the Maxwell School are digitizing city engineers’ field books from the early 1900s, carefully noting the dates water pipes were laid and entering the information into a geographic information system (GIS). They are led by Jonnell Robinson, an assistant professor of geography who hopes to provide easier access to an important determinant of water main breaks: the pipes’ age. In a related project, students are working with a geologist to map the city’s shale formations to explore whether underground erosion is contributing to water main breaks. Robinson hopes the data will help city officials see water main break patterns and predict where they’re most likely to occur next.

“This is an integrative approach to data analysis that informs decisions and public policy.”
— Jonnell Robinson

“It’s a very geographic problem and when we combine different datasets on a map, we can see patterns,” she says. “This is an integrative approach to data analysis that informs decisions and public policy.”

Robinson, hired a decade ago to fill the new community geographer post on Maxwell’s staff, was made faculty director of Community Geography in 2011, filling a tenure-track position consistent with Syracuse University’s new criteria for “publicly engaged scholarship.” Community Geography partners with local organizations and governmental agencies to bring geographic analysis to bear on public issues.

Robinson now also serves as an “innovation fellow” in the City of Syracuse’s new Office of Innovation (known as the Syracuse “i-team”). The five-person team was funded by a recent $1.35-million, three-year Bloomberg Philanthropies grant. They are charged with helping the city identify innovative approaches to urban challenges. Syracuse was one of just 15 American cities to receive the grant.

As community geographer, Robinson crosses departmental lines within Maxwell to connect data gathering and analysis with real-life community challenges. Her projects — which often involve students and volunteers from community organizations — have targeted significant social and public policy challenges. The 100-plus projects she has facilitated for nonprofits and community-based organizations have addressed teen pregnancy, unemployment, the Earned Income Tax Credit, overlapping jurisdictions and mandates of literacy organizations, statewide hunger mapping, and hydrofracking leases in Onondaga County, among others.

The i-team will work on three municipal priorities; for each, they will generate ideas, make recommendations, and help city staff adapt to new ways of operating. The first priority they took on was infrastructure.

“City workers’ backs are against the wall all the time,” says Andrew Maxwell ’06 MPA, director of the i-team and the city’s director of policy. “These departments go from crisis to crisis, struggling every day to provide services. They don’t have the luxury to look at the big picture. The i-team can think in a big-picture, strategic way all the time.” (Another alumnus on the i-team is Sam Edelstein ’07 BA [PSt/Econ/PSc], the team’s analytics coordinator.)

Improved data management, analysis, and technology use, Robinson says, encourage the city to make more-strategic and intentional decisions about where and how to spend on infrastructure repairs and improvements. For example, the local utility and city DPW could schedule maintenance at the same time rather than dig up the same road twice.

“City workers’ backs are against the wall all the time. . . . They don’t have the luxury to look at the big picture.”
— i-team Director Andrew Maxwell ’06 MPA

Infrastructure issues don’t make splashy headlines, but, says i-team director Maxwell, “they are the public services that are most fundamental to quality of life. We need to find new ways to work together, use data and social media, and engage the public differently if we are going to make a compelling case that we must invest in these things.” Syracuse Mayor Stephanie Miner champions that philosophy, he adds.

Robinson’s i-team involvement represents engaged scholarship, she says. “Engaged scholars are often on the cutting edge,” she says. “People on the ground know what the problems are in the community before those problems appear in academic journals.”

Her involvement is also an example of a Bloomberg Philanthropies priority: communication and relationship-building across sectors, with a resistance to top-down solutions. “Ideas can come from anywhere,” Robinson says. “If you’ve been doing a job for a long time, you probably have ideas about how to do it better.”

Both school and community benefit from intentional partnerships like the i-team, Robinson says. The focus on data analysis, for example, also serves the city’s pursuit of government and foundation grants. Students, meanwhile, connect to real-world problems, preparing them for employment in data and innovation offices.

This article appeared in the fall 2015 print edition of Maxwell Perspective; © 2015 Maxwell School of Syracuse University. To request a copy, e-mail dlcooke@maxwell.syr.edu.