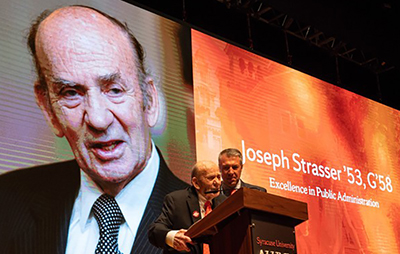 “Prior to World War II, Joe and his brother Alex were growing up in Vienna, Austria,” explains Dean David M. Van Slyke in the video. “Austria became occupied by the Nazis and Joe’s father took quick action, and sent Joe and his brother Alex to the United States on a ship with no family or loved ones, no ability to speak English and landing in New York City and being taken in by an aunt in Queens.”

“[Joe] had an interest in public administration, possibly from his time in the ROTC and the Army as a financial officer,” says Linda Birnbaum, assistant dean for advancement, “and he just gravitated to that immediately.”

After serving as a finance officer in the U.S. Army during the Korean conflict and then earning a Maxwell MPA, Strasser started his career as the first budget officer of Savannah, Georgia. He later served the city of Jacksonville, Florida, holding various fiscal posts until he retired in 1996.

Since retiring, Strasser has devoted himself to philanthropy and community service. Earlier this year, Strasser made a $3-million philanthropic commitment to create a permanently endowed and named professorship in public administration at the Maxwell School. This generous gift raised Strasser’s total giving to Maxwell to more than $6 million — a remarkable figure for a life-long public servant.

When accepting the award, Strasser began by honoring his late brother, Dr. Alexander Strasser, also a Syracuse University alum. Strasser spoke about his time in Germany and his philanthropic commitment to education and the welfare of animals and concluded by thanking Dean Van Slyke and Chancellor Kent Syverud.