A Culture of Conspiracy: Apocalyptic Visions in Contemporary America 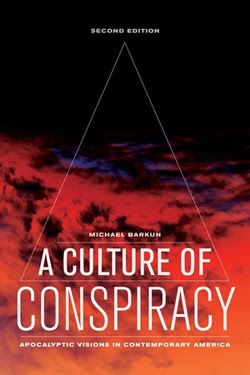 American society has changed dramatically since "A Culture of Conspiracy" was first published in 2001. In this revised and expanded edition, Michael Barkun, professor emeritus of political science, delves deeper into America's conspiracy sub-culture, exploring the rise of 9/11 conspiracy theories, the "birther" controversy surrounding former President Barack Obama's American citizenship, and how the conspiracy landscape has changed with the rise of the internet and other new media. What do UFO believers, Christian millennialists, and right-wing conspiracy theorists have in common?

According to Barkun in this fascinating yet disturbing book, quite a lot. It is well known that some Americans are obsessed with conspiracies. The Kennedy assassination, the Oklahoma City bombing, and the 2001 terrorist attacks have all generated elaborate stories of hidden plots. What is far less known is the extent to which conspiracist worldviews have recently become linked in strange and unpredictable ways with other "fringe" notions such as a belief in UFOs, Nostradamus, and the Illuminati. Unraveling the extraordinary genealogies and permutations of these increasingly widespread ideas, Barkun shows how this web of urban legends has spread among subcultures on the internet and through mass media, how a new style of conspiracy thinking has recently arisen, and how this phenomenon relates to larger changes in American culture.

This book, written by a leading expert on the subject, is the most comprehensive and authoritative examination of contemporary American conspiracism to date. Barkun discusses a range of material-involving inner-earth caves, government black helicopters, alien abductions, secret New World Order cabals, and much more-that few realize exists in our culture. Looking closely at the manifestations of these ideas in a wide range of literature and source material from religious and political literature, to New Age and UFO publications, to popular culture phenomena such as The X-Files, and to websites, radio programs, and more, Barkun finds that America is in the throes of an unrivaled period of millenarian activity. His book underscores the importance of understanding why this phenomenon is now spreading into more mainstream segments of American culture.