Origins of the Mass Party: Dispossession and the Party-Form in Mexico and Bolivia in Comparative Perspective 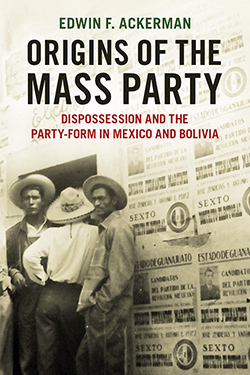 Edwin Ackerman, assistant professor of sociology at the Maxwell School, examines two nationalist insurrections that were largely composed of a peasant-base in Mexico in 1921 and Bolivia in 1952 in his new book, "Origins of the Mass Party: Dispossession and the Party-Form in Mexico and Bolivia in Comparative Perspective" (University of Oxford Press, 2021).

In both cases, insurrectionists triumphed over oligarchical regimes and groups led by upper-middle class intelligentsia who adopted populist agrarian discourse attempted to incorporate the large predominantly peasant base into their parties. Ackerman finds the insurrection in Mexico to have been radically different than the Insurrection in Bolivia. The Partido Revolucionario Institucional in Mexico managed to incorporate peasants into the party, while Bolivia’s Movimiento Nacionalista Revolucionario did not. Ackerman examines the historical conditions necessary for the emergence of mass political parties and argues that parties are the predominant form of political mobilization at a global scale.

Ackerman’s research focuses on political sociology, comparative-historical sociology, Latin-American studies and social theory. He received a Ph.D. from the University of California, Berkeley in 2016.

This book argues that the mass party emerged as the product of two distinct but related “primitive accumulations”—the dismantling of communal land tenure and the corresponding dispossession of the means of local administration. It illustrates this argument by studying the party central to one of the longest regimes of the 20th century—the Partido Revolucionario Institucional (PRI) in Mexico, which emerged as a mass party during the 1930s and 1940s. I place the PRI in comparative perspective, studying the failed emergence of Bolivia’s Movimiento Nacionalista Revolucionario (MNR) (1952–64), attempted under similar conditions as the Mexican case. Why was party emergence successful in one case but not the other? The PRI emerged as a mass party in areas in Mexico where land privatization was more intensive and communal village government was weakened, enabling the party’s construction and subsequent absorption of peasant unions and organizations. Ultimately, the overall strength of communal property-holding and concomitant traditional political authority structures blocked the emergence of the MNR as a mass party. Where economic and political expropriation was more pronounced, there was a critical mass of individuals available for political organization, with articulatable interests, and a burgeoning cast of professional politicians that facilitated connections between the party and the peasantry.