Between Crown and Commerce: Marseille and the Early Modern Mediterranean 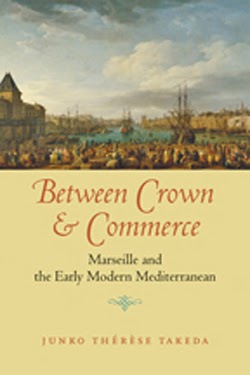 "Between Crown and Commerce" examines the relationship between French royal statecraft, mercantilism, and civic republicanism in the context of the globalizing economy of the early modern Mediterranean world. This is the story of how the French Crown and local institutions accommodated one another as they sought to forge acceptable political and commercial relationships with one another for the common goal of economic prosperity.

Junko Takeda, professor of history, tells this tale through the particular experience of Marseille, a port the monarchy saw as key to commercial expansion in the Mediterranean. At first, Marseille’s commercial and political elites were strongly opposed to the Crown’s encroaching influence. Rather than dismiss their concerns, the monarchy cleverly co-opted their civic traditions, practices, and institutions to convince the city’s elite of their important role in Levantine commerce. Chief among such traditions were local ideas of citizenship and civic virtue. As the city’s stature throughout the Mediterranean grew, however, so too did the dangers of commercial expansion as exemplified by the arrival of the bubonic plague. Marseille’s citizens reevaluated citizenship and merchant virtue during the epidemic, while the French monarchy's use of the crisis as an opportunity to further extend its power reanimated republican vocabulary.

"Between Crown and Commerce" deftly combines a political and intellectual history of state-building, mercantilism, and republicanism with a cultural history of medical crisis. In doing so, the book highlights the conjoined history of broad transnational processes and local political change.