Citizens of an Empty Nation: Youth and State-making in Postwar Bosnia and Herzegovina 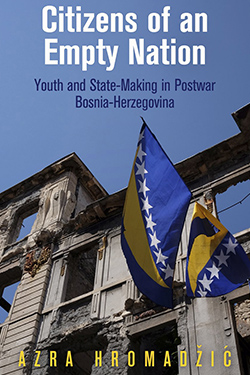 In the wake of devastating conflict in Bosnia-Herzegovina, the polarizing effects of everyday ethnic divisions, combined with hardened allegiances to ethnic nationalism and the rigid arrangements imposed in international peace-building agreements, have produced what Azra Hromadžić, associate professor of anthropology, calls an "empty nation."

Hromadžić explores the void created by unresolved tensions between mandated reunification initiatives and the segregation institutionalized by power-sharing democracy, and how these conditions are experienced by youths who have come of age in postconflict Bosnia-Herzegovina.

Building on long-term ethnographic research at the first integrated school of Bosnia-Herzegovina, "Citizens of an Empty Nation" offers a ground-level view of how the processes of reunification play out at the Mostar Gymnasium. Hromadžić details the local effects of the tensions and contradictions inherent in the processes of postwar state-making, shedding light on the larger projects of humanitarian intervention, social cohesion, cross-ethnic negotiations, and citizenship.

In this careful ethnography, the Mostar Gymnasium becomes a powerful symbol for the state's simultaneous segregation and integration as the school's shared halls, bathrooms, and computer labs foster dynamic spaces for a rich cross-ethnic citizenship—or else remain empty.