Dangerous to Know: Women, Crime, and Notoriety in the Early Republic 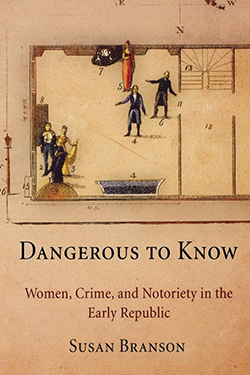 In 1823, "the History of the Celebrated Mrs. Ann Carson" rattled Philadelphia society and became one of the most scandalous, and eagerly read, memoirs of the age. This tale of a woman who tried to rescue her lover from the gallows and attempted to kidnap the governor of Pennsylvania tantalized its audience with illicit love, betrayal, and murder.

Carson's ghostwriter, Mary Clarke, was no less daring. Clarke pursued dangerous associations and wrote scandalous exposés based on her own and others' experiences. She immersed herself in the world of criminals and disreputable actors, using her acquaintance with this demimonde to shape a career as a sensationalist writer.

In "Dangerous to Know," Professor Susan Branson follows the fascinating lives of Carson and Clarke, offering an engaging study of gender and class in the early nineteenth century. According to Branson, episodes in both women's lives illustrate their struggles within a society that constrained women's activities and ambitions. She argues that both women simultaneously tried to conform to and manipulate the dominant sexual, economic, and social ideologies of the time. In their own lives and through their writing, the pair challenged conventions prescribed by these ideologies to further their own ends and redefine what was possible for women in early American public life.