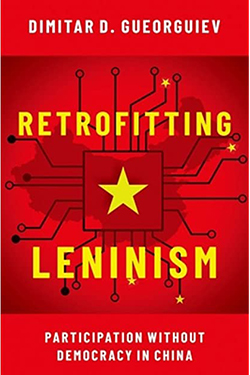 Maxwell School faculty member Dimitar Gueorguiev investigates how the Chinese Communist Party has maintained power in the People’s Republic of China throughout reforms and rapid development in his new book, “Retrofitting Leninism: Participation without Democracy in China” (Oxford University Press, 2021).

Gueorguiev’s research focuses on comparative political economy, authoritarian institutions, governance and survey methods. He received a Ph.D. from the University of California at San Diego in 2014. He is also the author of “China’s Governance Puzzle: Enabling Transparency and Participation in a Single-Party State” (Cambridge University Press, 2017). He is currently a China Fellow at the Wilson Center and a Public Intellectual with the National Committee on U.S. China Relations.

“Retrofitting Leninism” explains, through the lens of China, how open governance and modern information technology come together to sustain a tightly controlled but socially responsive system of authoritarianism.

When closed authoritarian regimes reform and open up, they often fail, most eventually breakdown. The People's Republic of China stands as a notable exception. How has the ruling Chinese Communist Party maintained power throughout decades of reform and rapid development? Drawing inspiration from the CCP's Leninist origins, Dimitar Gueorguiev offers a novel and empirically grounded explanation. The key to the CCP's staying power, he argues, is its ability to integrate authoritarian control with social inclusion - a combination that is being facilitated by modern telecommunications technology.

Relying on statistical data, media reports, and a series of original opinion polls, Gueorguiev explores how public input feeds into political oversight and policy planning. To unpack how public preferences are acquired, processed, and prioritized, he analyses bottom-up representation and coordination in local Chinese legislatures. Finally, to evaluate the impact of inclusion, he shows that public engagement contributes to both policy stability and public satisfaction. Although public inclusion is instrumental to the CCP's hold on power, Gueorguiev underscores that "inclusive authoritarianism" greatly depends on the voluntary participation of Chinese citizens, which is far from guaranteed.

A trenchant exploration of the Leninist model today, Retrofitting Leninism will reshape our understanding of the authoritarian approach to government and its prospects for the future.