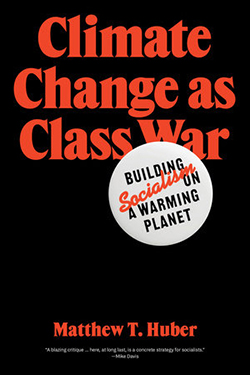 Matt Huber, professor of geography and the environment, has written a new book, “Climate Change as Class War: Building Socialism on a Warming Planet” (Verso, 2022).

The book focuses on the everyday material struggle of the working-class over access to energy, food, housing and transportation. Huber argues that these necessities are core industries that need to be decarbonized.

The climate crisis is not primarily a problem of believing science or individual carbon footprints, says Huber, but rather a class problem rooted in who owns, controls and profits from material production. As such, he says, it will take a class struggle to solve.

The capitalist class is the most significant driver of climate change, asserts Huber. Planetary working-class solidarity and the unionization of the energy industry will be the greatest tools in the climate movement, he says.

Huber earned a Ph.D. from Clark University in 2009. His research focuses on political economy, historical geography, energy and capitalism and climate politics. He received a National Science Foundation grant in 2014 for his work, “The Nitrogen Fertilizer Industry: Integrating Industrial Ecological and Political Ecology Approaches.”

In this groundbreaking analysis, Matthew T. Huber argues that the carbon-intensive capitalist class must be confronted with its disproportionate effect on the climate. Yet, at present the climate movement is unpopular and rooted in the professional class, where it remains incapable of meeting this dizzying challenge.

As an alternative, Huber proposes a climate politics to appeal to the majority—the working class—and he evaluates the Green New Deal as a first attempt to channel working-class material and ecological interests. He advocates building union power in the very energy system that must be transformed. In the end, winning the climate struggle will require an internationalist approach based on planetary working-class solidarity.