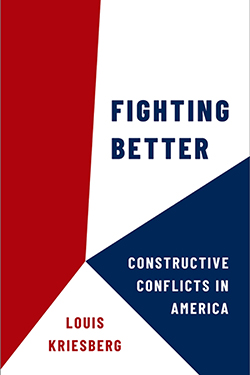 “Fighting Better” explores how social and political conditions deteriorated over time and applies constructive conflict reasoning to propose ways to overcome the current circumstances and foster democracy. Kriesberg additionally looks at how certain conflicts result in progress while others lead to further polarization.

This book follows “Constructive Conflicts: From Emergence to Transformation, Sixth Edition” (Rowman & Littlefield, 2022) co-authored by Kriesberg and Bruce W. Dayton ’99 Ph.D. (PSc), senior research associate in the Program for the Advancement of Research on Conflict and Collaboration.

Kriesberg received a Ph.D. from the University of Chicago in 1953. His research interests include social conflicts, conflict resolution, interstate and intercommunal conflicts and constructive struggles.

The people in the United States are experiencing an extreme degree of division, political partisanship, and civic disorder. Destructive fights are waged about matters such as misinformation, voting rights, school curriculum, government spending, and personal privacy. How can these distressing circumstances be overcome? More specifically, what makes the difference between conflicts that result in progress versus those that further contribute to a greatly polarized, extremely unequal, and distressed society?

In “Fighting Better,” Louis Kriesberg argues that the crises confronting the US presently are the result of changes in dynamics along three societal dimensions: class, status, and power. Those changes were brought about to a great degree by people waging conflicts constructively, destructively, or avoiding overt conflicts altogether. Assessing major domestic conflicts in the United States since 1945, Kriesberg evaluates how well conflicts were waged in terms of advancing justice, liberty, and equal opportunity for all Americans. Moreover, he offers ideas for how some of those fights might have been waged more effectively and with longer-term benefits, connecting current US crises to past mistakes. In doing so, Kriesberg deepens our understanding of how the way conflicts are waged can help to reduce inequities in class, power, and status, particularly with regard to gender and race.