Norms in International Relations: The Struggle against Apartheid 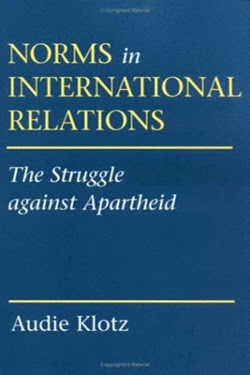 Applying a social-constructivist approach to her richly detailed case history, Audie Klotz, professor of political science, demonstrates that normative standards such as racial equality can serve as much more than a weak constraint on fundamental strategic concerns.

Norms can play a crucial role in the formation of global policy. After forty years of protest against apartheid, the world celebrated Nelson Mandela's inauguration as South Africa's first democratically elected president. Klotz considers why racial discrimination in South Africa became a global concern and why—in a remarkable change of practice—nations and international organizations adopted sanctions against the Pretoria regime.

By explaining how the world community actively came to condemn apartheid, "Norms in International Relations" contributes to broader debates on the role of norms in global politics. Klotz rehearses a fascinating history, combining the power politics of economic sanctions and the normative politics of racial equality. She reenacts the events that resulted in the United Nations decision to oppose apartheid. The author also analyzes anti-apartheid activism in the British Commonwealth and in the Organization of African Unity, and she documents changing attitudes toward South African racial separateness in the United States, Britain, and Zimbabwe.

Abdelaaty Talks to CNN, Mother Jones About Why Countries Embrace Some Refugees but Not Others

McDowell Discusses Impact of Western Sanctions on Russia in Hill Times, War on the Rocks