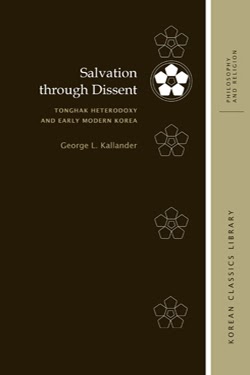 A popular teaching that combined elements of Confucianism, Daoism, Buddhism, folk beliefs, and Catholicism, Tonghak (Eastern Learning) is best known for its involvement in a rebellion that touched off the Sino-Japanese War (1894–1895) and accelerated Japanese involvement in Korea.

Through a careful reading of sources—including religious works and biographies many of which are translated and annotated here into English for the first time—Salvation through Dissent traces Tonghak’s rise amidst the debates over orthodoxy and heterodoxy in Chosŏn Korea (1392–1910) and its impact on religious and political identity from 1860 to 1906.

It argues that the teachings of founder Ch’oe Cheu (1824–1864) attracted a large following among rural Koreans by offering them spiritual and material promises to relieve conditions such as poverty and disease and provided consolation in a tense geo-political climate. Following Ch’oe Cheu’s martyrdom, his successors reshaped Tonghak doctrine and practice not only to ensure the survival of the religious community, but also address shifting socio-political needs. Their call for religious and social reforms led to an uprising in 1894 and subsequent military intervention by China and Japan.

The work locates the origins of Korea’s twentieth-century religious nationalist movement in the aftermath of the 1894 rebellion, the resurgence of Japanese power after the Russo-Japanese War (1904–1905), and the re-creation of Tonghak as Ch’ŏngogyo (the Religion of the Heavenly Way) in 1905.

As a study of religion and politics, "Salvation through Dissent" adds a new layer of understanding to Korea’s changing interactions with the world and the world’s involvement with Korea. In addition to students and scholars of Korea’s early modern period, it will appeal to those interested in global politics, Chinese and Japanese studies, world religion, international relations, and peasant history. The extensive, annotated translations will be of particular use in courses on Korea, East Asia, and global religion.