The Diary of 1636: The Second Manchu Invasion of Korea 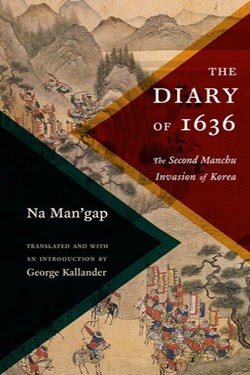 A new book by historian George Kallander provides a translation of the only first-person account of Korea’s resistance to a key Manchu invasion in the 17th century. The book, titled The Diary of 1636: The Second Manchu Invasion of Korea, is published this month by Columbia University Press.

Kallander translated and provides analysis of a diary written by Korean scholar-official Na Man’gap, who witnessed the battle and its aftermath. The 1636-37 Manchu invasion of Korea – the second over the course of a decade – was a consequential chapter in an ongoing three-way political rivalry in the early 17th century among Korea’s Chosŏn dynasty, the Ming in China, and the rising Manchu in northeast Asia. The Manchu’s successful invasion forced Korea to realign with the new Manchu Qing dynasty, altering the balance of power in the region. Kallander’s translation – the first ever of this work into English from classical Chinese, the script of the educated elite in premodern Korea — includes, for example, Na’s reports of military campaigns, political and military decision making at the court, the capture of the Korean royal family, and the treatment of prisoners of war, as well as important observations about the war’s political, social, and cultural aftermath. Kallander’s lengthy introduction and extensive annotations place Na’s diary in a historical, political, and military context.

Kallander, an associate professor of history, is director of the East Asia Program, hosted by Maxwell’s Moynihan Institute of Global Affairs. He is also the author of Salvation Through Dissent: Tonghak Heterodoxy and Early Modern Korea, published in 2013 by the University of Hawai’i Press. He is a co-editor of the Cambridge History of Korea project’s volume on the Chosŏn Dynasty (1392-1910), to which he also contributed a chapter on the Tonghak religion and dissent. He has received major fellowships from the Institute for Advanced Study, Columbia University, and the Academy of Korean Studies — the last of which contributed to the completion of The Diary of 1636.

Early in the 17th century, Northeast Asian politics hung in a delicate balance among the Chosŏn dynasty in Korea, the Ming in China, and the Manchu. When a Chosŏn faction realigned Korea with the Ming, the Manchu attacked in 1627 and again a decade later, shattering the Chosŏn-Ming alliance and forcing Korea to support the newly founded Qing dynasty.

The Korean scholar-official Na Man’gap (1592–1642) recorded the second Manchu invasion in his Diary of 1636, the only first-person account chronicling the dramatic Korean resistance to the attack. Partly composed as a narrative of quotidian events during the siege of Namhan Mountain Fortress, where Na sought refuge with the king and other officials, the diary recounts Korean opposition to Manchu and Mongol forces and the eventual surrender.

Na describes military campaigns along the northern and western regions of the country, the capture of the royal family, and the Manchu treatment of prisoners, offering insights into debates about Confucian loyalty and the conduct of women that took place in the war’s aftermath. His work sheds light on such issues as Confucian statecraft, military decision making, and ethnic interpretations of identity in the seventeenth century.

Translated from literary Chinese into English for the first time, the diary illuminates a traumatic moment for early modern Korean politics and society. Professor George Kallander’s critical introduction and extensive annotations place "The Diary of 1636" in its historical, political, and military context, highlighting the importance of this text for students and scholars of Chinese and East Asian as well as Korean history.