The Political Economy of Trade, Aid and Foreign Investment Policies 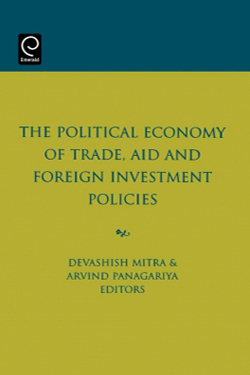 While considerable progress has been made in analyzing the formulation of international economic policies, the existing literature remains deficient in several respects.

First, the existing models take a relatively simplistic view of the political-economy environment. For example, in contrast to the observed reality, a large majority of the models view the government as a monolithic entity.

Second, there is only limited recognition of the political-economy interactions between interest groups across national borders.

Fourth, the empirical work in this area, both cross-industry within national boundaries and cross-national, is very much in infancy and in need of further development.

Fifth, other aspects of international economic policy such as foreign aid and foreign direct investment have been scarcely addressed in the existing literature.

The volume makes major advances in the area of political economy of trade, aid and investment policy, and therefore will be of considerable interest to academic researchers and students of international economics. Because of its obvious focus on the process of policy formulation, economists as think tanks, international institutions such as the World Bank, International Monetary Fund and World Trade Organization, and trade-policy analysts in developed and developing countries will also read it.